Implement an algorithm for a room cleaning robot

I wanted to ask this question to my interview candidates, hence wanted to first give it a shot to see if this is doable in 45 mins. Here's the code that I was able to come up with in 45 minutes. Can folks please let me know if there are any logic flaws in this code?

TL;DR - I would not hire you

I am going to be fair here and state that I am judging this code more harshly because you are a not just any junior developer or applicant, but you are actually responsible for testing and technically evaluating potential hires. This implies a certain skill level, and it means that you should be innately able to display what the bar for the quality of the company's code is.

And to be quite frank, as an applicant, if I saw this as the proposed solution, I would genuinely back out of working for this company.

I spent more time reviewing this than you did writing it (if you kept to your own 45 minute limit), so I hope you appreciate that I'm not trying to be mean, but I am trying to be very direct about the many issues I've uncovered. The more I looked at your code, the more started realizing that it is deeply flawed, suffers from multiple reality 101 failures, and most of all it is painfully apparent that you never even tested it, not even once.

I wouldn't hire you (for any position above junior) for several reasons:

That being said, the code was formatted nicely.

I don't want to make you feel bad. We've all struggled with certain problems at one time or another. There are plenty of projects I've started that have been deeply flawed.

This is more a comment on the question rather than the solution, but behavioral logic of this kind is notorious for needing shotgun debugging. It's exceedingly hard if not impossible to see if this algorithm works as intended based on reading the code and not seeing it in action.

This applies to me needing to review your code now, you needing to check your applicants' code, as well as any applicant who'd like to debug their code while developing to find any obvious flaws.

I would strongly advise you to create a default test fixture where you have some predefined room setups to test the robot with, and a visual tool that shows you the room and the robot's progress step by step.

I will try to review your algorithm to some degree, but keep in mind that I did not write an entire test scenario for this. This is just based on what I can interpret by reading the code, and some experience I have with pathfinding logic.

Based on the question as presented, I find it counterintuitive that you only add a robot interface without implementation, and then develop the "algorithm for a robot" in another class altogether. I'm not against separating the movement logic from the cleaning logic, but the names leave something to be desired. IRobot (and the presumed Robot class) don't indicate movement, and RobotManager doesn't indicate cleaning.

Especially for an interview question, I find this a really important sticking point. It shows you how well this developer is independently going to be able to keep your code clean.

Your code relies on recursion, and the recursive stack size is finite. Therefore, you've implemented a natural cap on how big a room can be, and the way it behaves when it reaches that cap (StackOverflowException) is ugly.

I would strongly advice using some kind of iteration instead of recursion here. A for(each) is not going to be appropriate since you don't know the size of the room in advance, but a while would be appropriate here.

I don't like the Clean method name, because it is also the method which handles traversal, even though you also have a separate Traverse method. Something has gone awry here. You've duplicated the movement logic in both methods, and implemented them slightly differently.

That's not promoting reusability the way it should.

Your algorithm in general

There are frankly a lot of glaring issues with the logic itself. I can't delve into all of them in full depth. If you had had a visualization tool and test data, some of these would've been easy to spot. I'll elaborate on a few core issues, but quite frankly there's little logic to salvage here when you've noticed all the bugs.

It's important to observe that your Clean method is the only method being called to handle both the cleaning and the room traversal. Traverse is only used after the cleaning has been completed.

If you back out of every cleaning operation when the current node has already been cleaned, that means that you are not allowing the robot to cross a cleaned node. That is a significant flaw in your logic. The easiest test case is having a room whose obstacles are laid out like a Bomberman level: 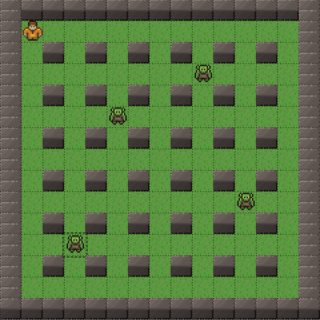 Try traversing all the green tiles in a continuous line without crossing your path.

You might be able to snake around the level and then get into the first dead-end street, and your robot will never turn itself around (it only attempts straight, left and right).

But even if it did turn around, when it tries to exit that dead-end street, it has to drive over a path it already drove over. And what does you code do then? Refuse to continue. It tries to backtrack back into the dead-end street.

Since it is no longer adjacent to any uncleaned and accessible tile, and therefore it will report that the cleaning has been completed.

You might think that my example is a fringe case for a room that's designed to trip up your system. But your logic fails for a completely empty room as well. Your logic is as follows: 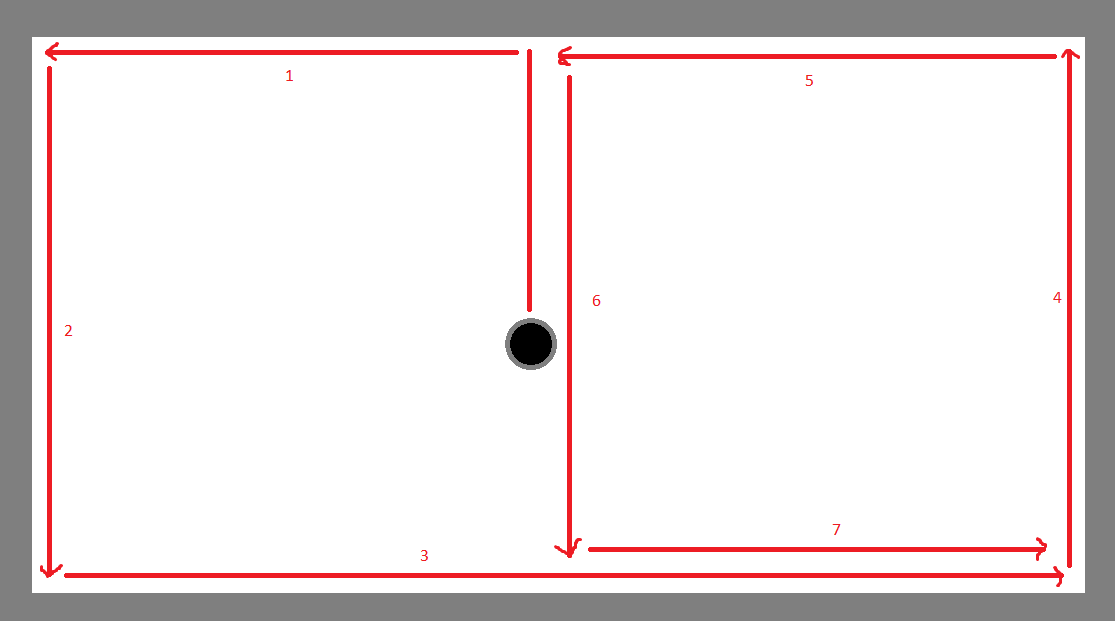 Edit: I just noticed I forgot to number the first straight. Oops! Let's just say I totally intended to zero-index them...

After the straight that is (incorrectly) labeled 6 in the image, since it will never cross a tile that has already been cleaned, your robot has boxed itself in and will never clean the left half of the room (except the outer edge which it cleaned in the beginning).

This system just doesn't make any sense. The robot's interface is fine. You are clearly understanding that the robot only knows its own orientation, and therefore must be issued commands relative to its own position (without knowing its location in the room).

You never check the robot's orientation. That's a massive red flag. It makes no sense to actively need to rotate a robot, and then never bother with using that rotation in your logic. Your logic decides to "go left", but since it doesn't know the orientation of the robot, how can it even figure out what "left" means to the robot?

I can't elaborate on the full ramification of this, but it essentially means that you cannot just assume that "node left" == "robot left", since the robot's orientation alters how the robot is oriented in the room. You've mixed two completely different coordinate systems and have not made sure they are compatible with one another.

Node-based traversal 2 - the big one

In my opinion, this is the biggest issue in your algorithm. This is something you should have spotted without even running the code.

Every movement moves onto a new Node(). You are not tracking any meaningful node state.

Let's imagine a 4 tile room, and the robot starts in the bottom right corner. 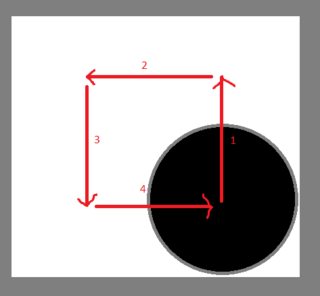 For brevity, I'm only focusing on the successful movement actions. The first 4 steps are what you intended them to be:

I want to focus on what happens in step 3 when you realize that moving to the left was possible:

The next node is a new Node(). But you actually already knew this location (because you have been there before). But your code makes no effort to check if this is a known location. It always blindly makes a new node.

Since currentNode is always a newly created node, which by definition could not have been cleaned yet.

You've fallen into the age-old trap of thinking that compilers read intent, speak English, and figure out your system for you. Putting it another way:

Tell me what will be in whatIsThisValue. Is it your topRight object?

Nope. It's null. Just because left is the opposite of right doesn't mean that your code will automatically understand that "if B is right of A, then A must be left of B". That's just not how it works.

This issue renders your entire floor node state tracking logic, which the entire cleaning logic hinges on to know both how to avoid double work and to figure out when it's done, completely defeated.

Following the above example, the robot will go straight for a few steps. Each step, that's a new recursive level. But you mustn't forget about the "queued" left/right commands from the first few steps. For now, you've drilled down into a new level, but what drills down will eventually bubble back up. Numbering the levels of recursion, you're looking at something like:

No matter how deep we dig into the recursive tree, Left/Right 1/2/3 will eventually be executed when we're done digging.

The problem with this is that backtracking on the recursive stack does not backtrack the robot's actual location. Therefore, the location in which Left 1 will be executed will be completely different depending on whether or not Straight 1 succeeded or not. This makes it impossible to know which location Left 1 is actually going to visit.

When you realize the chaos that this entails, you start understanding that you don't have an algorithm here, you have a brute force attack with just loads and loads of uncoordinated random movement.

If your robot had backtracked (i.e. moved backwards) whenever your Clean method returned (and bubbled up one recursive level), your logic would have been more correct. Still bugged, but the recursive approach would've at least made more sense.

Not the answer you're looking for? Browse other questions tagged interview-questions or ask your own question.