After experimenting with a sorted trie implementation in C, I felt that I understood tries pretty well, but was having trouble explaining how they work. Since the C code was based on existing code, I wanted to try it again in another language, from scratch.

Here's what I came up with. I tried to make it as minimal as possible. These tries aren't sorted, and nodes only reference a child and next node; parent and prev aren't used. I did give the "leaves" of the trie a name property, which is the full key. This isn't currently used, but it's useful for debugging, and it would be useful if a trie iterator were added (like Trie_dump from the question linked above).

I'm interested in feedback on the code itself this time, but not so much on things like white space, braces, semicolons, etc. I'm comfortable with the formatting the way it is. I'd be interested in an alternative to that labeled loop, though, and all other feedback is welcome.

Each node in the trie can have a key, a value, a next node, and a child node. In this diagram, each node is represented by a circle. The "root" node is at the left, the green "leaf" nodes are at the right, and the "branch" nodes are in the middle.

Each key is a single character (circled letters below). The "branches" have keys, while each "leaf" holds a value. 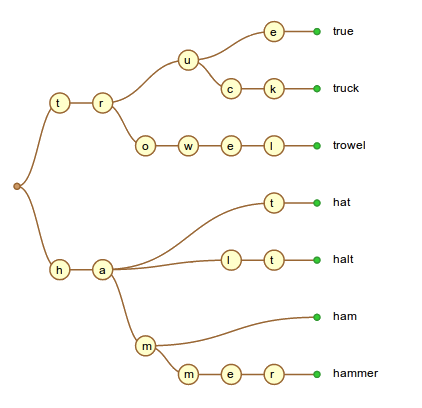 In the diagram, nodes appear to have multiple children. For example, the first "r" node has "u" and "o" children. Internally, nodes just have a child property; the first child. The next child is available in the first child's next property, and so on. It may help to think of child as "first child" and next as "next sibling."

Well, first of all, my optimization is an overhaul of your method. The concept is still tries. But I went for the JS route for several reasons:

As for the code that operates this, notes are on the comments:

Not the answer you're looking for? Browse other questions tagged javascript linked-list hash-map trie or ask your own question.