Here is a project that I have been working on for the past few days.

I have used the SFML library in C++ to make a flappy bird game of my own. I made this as a step towards learning GUI in C++.

The program is Object-Oriented as I believe this made it a little easier to maintain. Although this isn't my first time learning SFML, I am pretty rusty since I never tried to make something serious with it.

The physics for the bird

The obstacles are pretty straight forward.

What I expect from a review 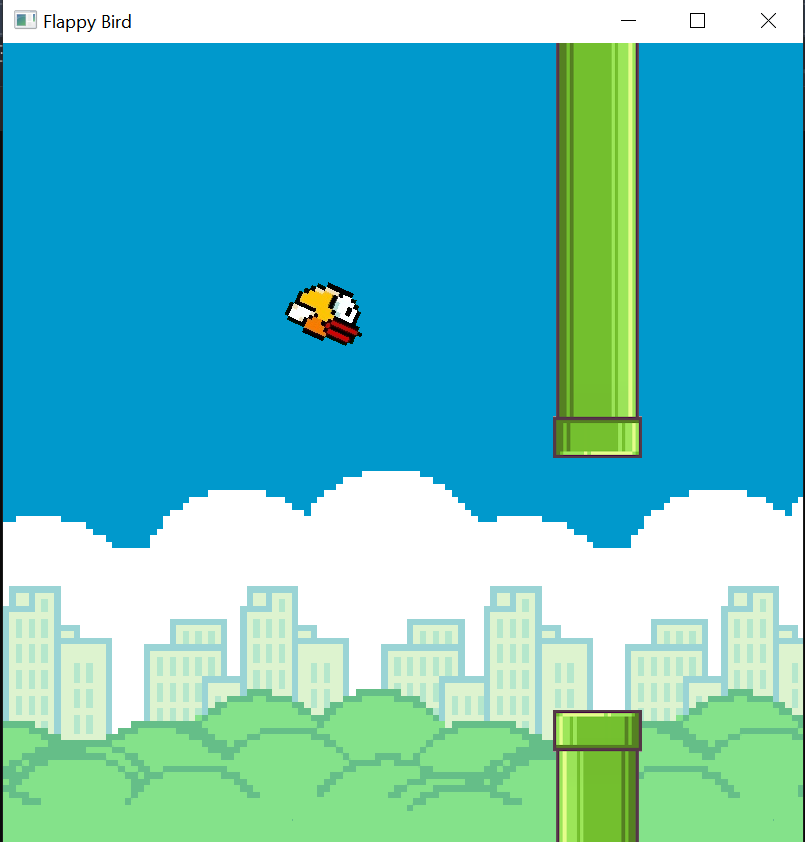 Prefer member variables to be private if possible

There are a lot of member variables that are public that are not used outside the class itself. For example, Game::score, Bird::texture_wing_up, and many more. These should all be private, as this prevents other classes from accidentily accessing these member variabels.

Why are detect_loss(), update_object_positions() and draw_objects() declared as inline functions in Game.h? I do not see any reason why these would be performance critical. Declare them as regular member functions, and define them in Game.cpp. Note that the compiler itself can still decide to inline those functions when they are called from mainloop().

Who is responsible for what

Your game is quite simple, and Game::draw_objects() looks perfectly reasonable. But what it actually does is having class Game reaching into class Bird and class Obstacle, and accessing their member variabels body and bottom/top_obstacle. This means that there is now quite a tight coupling between those classes. But consider now that drawing the bird would be much more complex than just drawing a single sf::Sprite. Maybe you have many separate sprites, for example one for the wings, one for the body, one for the head and so on, that all animate independently. Do you want class Game to be responsible for drawing a Bird in that case?

There are several ways to address this issue. You could simply add a member function that does all the drawing in class Bird:

I used the fact that sf::Window derives from sf::RenderTarget, so Bird::draw() is now more generic than if you would pass a reference to an sf::Window. Alternatively, with SFML, you could make Bird become an sf::Drawable, like so:

With either technique, you can make the sf::Sprite variabels private, and while it doesn't look like much of an improvement for Bird, it already becomes more interesting for Obstacle, where in Game::draw_objects() you should only have to call window.draw(obstacle) to have the Obstacle itself draw both its bottom and top parts.

(For games with much more objects you might want to look into using an Entity Component System like EnTT, where one of the components would be the drawable part of entities like the bird and the obstacle, but that is obviously complete overkill for this game.)

Have Game::handle_events() implement the while-loop

Create one high-level function to do the rendering. This keeps mainloop() nice and clean:

Create a member variable running that can be set to false in handle_events() if the window is closed, or by update_object_positions() if a collision between the bird and the obstacle is detected.

It's very good that you avoided magic constants in your code, and gave them clear names. The anonymous namespace does the same as static, and ensures they don't have external linkage. But even better is to make them constexpr instead of const. This makes it clear to the compiler that this is not meant to be used as a variable (of which an address can be taken for example), but really just as a literal constant.

There still are magic constants left

There are still lots of magic constants in your code. For example, the window size, the initial position of the obstacle, and so on.

Call reset() from the constructor

You have some unnecessary code duplication, since you are initializing member variables manually in the constructor of Bird and Obstacle, that you also set from Bird::reset() and Obstacle::new_rand_obstacle(). Consider calling the latter two functions from the constructors of those classes.

C++ has much better random number generator facilities than C. Use then instead of rand(). For example, you can use std::uniform_int_distribution in Obstacle.

Avoid allocating objects on the heap for no good reason

There is no need to use new in main(), you can just write:

If you do want or need to avoid allocating an object on the stack, then you should still avoid using new and delete directly, but instead use something like std::unique_ptr to manage the lifetime for you automatically. like so:

I'm not an expert in SFML, so I can't really give any advice about that. Though, let me look at the code as is.

And to answer your question about the constants: I usually use constexpr constants. Whether it's in unnamed namespace, constants in a separate header or static constants in the class depends on the use case.

Not the answer you're looking for? Browse other questions tagged c++ object-oriented game physics sfml or ask your own question.