I have come across a situation where I feel running some code in parallel will greatly improve performance, but I am concerned about the implementation and am looking for some confirmation. Take the following controller resources

The contents of Get(...) function are fairly straight forward. A WCF call is made using the passed id to retrieve document a object. That document object contains a list of associated material numbers for which I need to make a separate WCF call for each to gather additional data

It is worth noting that I am using a library developed and maintained by a colleague to call WCF services that are hosted on the same VM, so lets just say that I don't have access to modify this library for sake of the question. Retrieving a material looks like the following

Everything works as expected, but as previously noted its possible for a significant number of materials to be returned (~20-60). Typically, I wouldn't encounter a problem like this since I would be utilizing HATEOAS and supplying the resource for each material in the DocumentModel object, however; this is an API for internal business use and the business requires all the data be in the response so I am left with little choice. So I made a separate implementation that will retrieve that material data in parallel

Here is where my concern is. There are no Async implementations in the library, so my initial thought was to just do the following

Both implementations work, but when I run them both side by side the one making calls in parallel is significantly faster and diagnostics shows the flow is what I expected as well 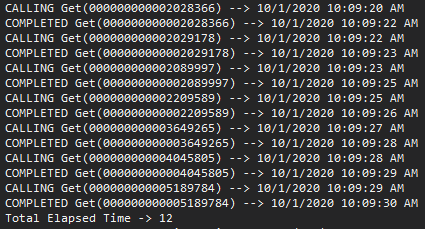 Is this an acceptable implementation or are there some pitfalls to this I may not be aware about?

This way it's not trying to make synchronous code async and can limit the amount of task inflight vs unlimited amount.