Can I draw a square with pixels more efficiently?

I'm drawing a square on a window using an implementation of Xlib. I put a colored pixel with my_pixel_put at a specific (x,y) coordinate. 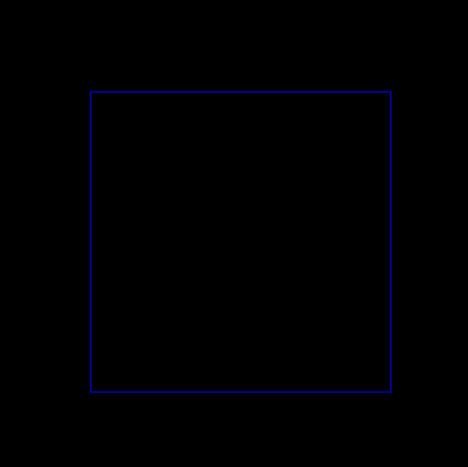 Could anything improve the performance of my code ? Or its readability ?

This is the prototype of my_pixel_put :

img is a structure containing data about the image such endiannes, bits per pixel, ... x and y are the width and height of the window. colour is the RGB colour of the pixel. (0,0) is actually the top left corner of the window (I know don't ask me why).

I don't have a working C compiler on my work computer, nor do I have Xlib available to me (I'm also not familiar with it, at all). That being said, given that we know our image is a square, you can do this with a single loop.

Use a simpler algorithm

The basic idea is that we know each corner of our square, and then by stepping through the length of a side, we can draw a pixel on each side of the square per iteration. This way, instead of nested looping, you do it all at once.

The one thing that occurs to me about this implementation is that you might not do quite as well from a caching perspective - the one benefit of doing things on a side-by-side basis is that you're more likely to be operating on data from the cache instead of from memory. I don't know how &img is actually stored or what my_pixel_put is doing, so its hard to give more concrete advice about this.

If you did encounter caching issues, short of changing things to process side-by-side (or maybe top + bottom in one loop, and left + right in another), there isn't a whole lot to do. A normal technique to handle cache churn is to use blocking to break up the loop. That won't help here, unfortunately - see below for why.

Suppose we know the following (these numbers are made up):

Each iteration of our loop grabs 4 cache lines - one for each side of the square. The top and bottom will be able to re-use the cache line for the next three values, while the right and left will have to get a new cache line. We then have the following sequence for how many cache lines we get at a time:

The 7th loop iteration would force some of the old data out of the cache. If we were going to be using data besides the border of the square (e.g. by filling it somehow) then it would be worthwhile to operate on 6x6 "blocks" of data, because then everything is in-cache instead of in-memory. Because we aren't using the interior of the square, however, we'll never actually get a benefit to blocking up the operation - most of those cache lines will always go to waste

Another benefit of this is that, if you wanted to parallelize this on a CPU or port it to a GPU, it'll be more straightforward. On a CPU, this is an embarrassingly parallel problem - assuming that my_pixel_put is thread-safe as long as you aren't modifying the same pixel, threading it should be trivial. On a GPU, the lack of conditional operations makes it a breeze as well.

You may want to change your memory access patterns if you go parallel, but additional detail is left as an exercise for the reader. As a hint, for CPU-based parallelism each thread should generally be working on distinct pieces of work to avoid ruining cache coherence.

Looking at your code as written, without algorithm changes

Reviewing your actual code, there are some simple ways that you can improve readability & maintainability without changing the algorithm much.

Whoops, I ended up rewriting it more than I meant to - I just couldn't make myself add another loop just because. To keep an equivalent number of loops, you could do something like this:

The real performance issue here is fairly simple: good performance is obtained by not repeating steps. The big step that you are doing repeatedly is to figure out where the pixel goes in the output space.

We wind up doing that currently for every point. Multiplication is hard (at least classically, and still on simple machines), so the fewer times we do it, the better. Consider this function:

Given a starting location and an appropriate stride, this can draw a vertical, horizontal, or 45 degree diagonal. Note that this should not be publicly accessible. It is too screwy if given the wrong parameters. But called from my_line_draw(image_t, int x0, int y0, int x1, int y1, pixel_t color) it provides a high performance implementation. FYI: Good values for stride are ((-WIDTH, 0, or +WIDTH) + (-1, 0, or +1)) * sizeof(pixel_t) (and omit the sizeof if you use the "or maybe" clause).

The other thing that tends to be pricy is all the validation needed. For instance, your my_pixel_put() must validate: the image is valid, the x is in a legal range, the y is in a legal range, and the color is valid. But an internal function like my my_primitive_line_draw() can be called with known good parameters. So my_line_draw() must still do it, but only once per line.

There are a number of similar tricks for high performance rendering of more complex shapes, though they tend to only work on well conditioned shapes.

Having said all that, one other performance issue in your code is that convoluted looping structure. Just write two independent loops, one on x, in which you draw at x,LWST_VAL and x,HGHST_VAL, and a similar one on y.

Not the answer you're looking for? Browse other questions tagged performance algorithm c image graphics or ask your own question.