As an exercise, I've made a text processing utility that wraps arbitrarily long lines of text, but only using fixed-size arrays and other basic C features.

I have mostly programmed in Python, C++ and Java so far, and I recently picked up K&R (second edition) to learn some C. I have only gone through the first chapter so far, which is "A Tutorial Introduction". At the end of this chapter, the last paragraph says:

At this point we have covered what might be called the conventional core of C. With this handful of building blocks, it's possible to write useful programs of considerable size, and it would probably be a good idea if you paused long enough to do so. These exercises suggest programs of somewhat greater complexity than the ones earlier in the chapter.

Since I have quite a bit of time on my hands, I took this "challenge" quite literally: I set out to solve the exercises strictly using only the language features shown in that chapter.

One of these exercises (exercise 1-22) reads:

Write a program to "fold" long input lines into two or more shorter lines after the last non-blank character that occurs before the \$n\$-th column of input. Make sure your program does something intelligent with very long lines, and if there are no blanks or tabs before the specified column.

Probably the best way to deal with arbitrarily long input lines would be to use dynamically allocated character arrays, but the above restriction implies I can only use fixed-size arrays.

This took quite a bit more time than I was expecting, and the end result works, but the algorithm is a bit of a mess; this is why I'm asking for a code review. My main concern is the correctness of the algorithm and whether it can be made simpler, but anything is welcome. Next up would be possible refactorings, then readability, and then code style, probably.

Here's my specific interpretation of this exercise:

Make a program that, for each line of input:

For the purposes of this question, define:

These examples are with the maximum line length (i.e. max columns) set to 10; I've added a vertical bar | at the 11th column just to make it easier to visualize, but this character isn't actually there in the input or output shown below. Also note that , for the last two lines of input, some of the blank characters are tabs.

Due to what I've said about only using features seen in the first chapter, I had to reinvent a few wheels. Here is a concrete list of restrictions I followed (which, if you propose any code, you should follow too).

I can only use the following:

Now, I allowed myself some exceptions that don't significantly alter the challenge, just to make life slightly easier and avoid reinventing too many wheels:

This is the algorithm to deal with a single line of input which I ended up implementing. It takes into account that I can only use arrays of a fixed size.

The main idea is to only read at most \$M\$ columns of input at a time, where \$M\$ is the maximum line length, deal with that segment individually, and move on to the next one. 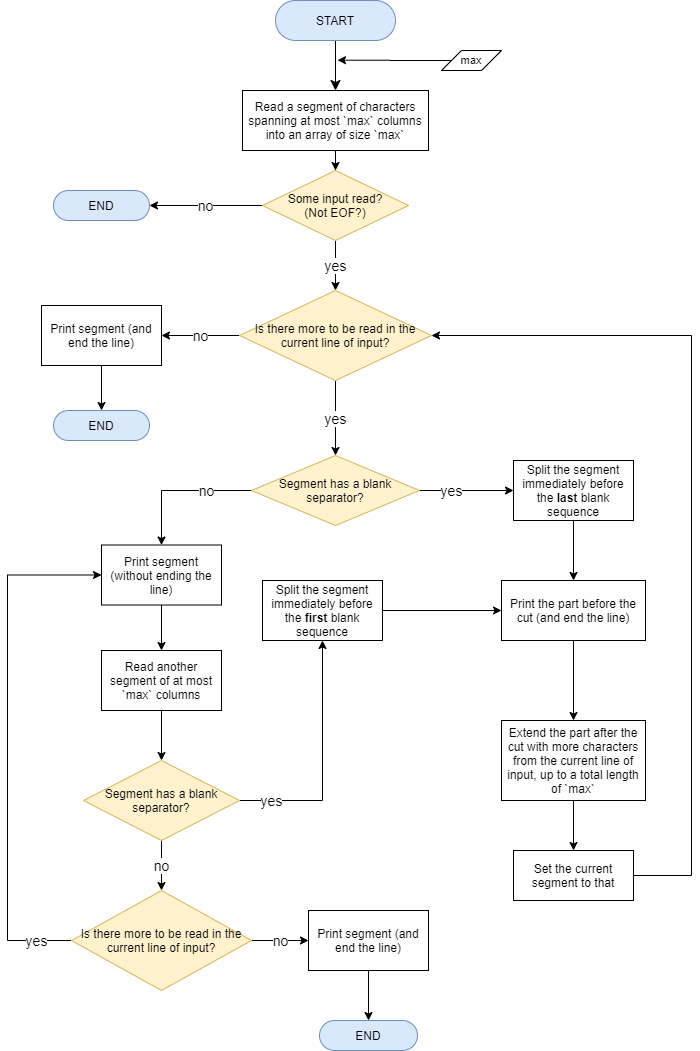 One final disclaimer before you go on to read the code. I'm mainly using camelCase as a naming convention. I know this is not conventional in C, but this is only an exercise for myself, so I just picked the naming convention I find the nicest.

Function that implements the algorithm

The function that implements the algorithm above is int readLineAndPrintFolded(const int maxLength, const int tabSize) in the code below, at the very bottom, before main. I recommend you start reading from there—the rest are helper functions and their name pretty much describes what they do.

You can copy and paste this in a text file, compile it under the C99 standard, and run it.

Please help me, my task-completion-obsessed brain won't let me go on to the next chapter until I finish all exercises!

You have obviously put in a lot of effort into this question and deserve an answer.

I have mostly programmed in Python, C++ and Java so far, and I recently picked up K&R (second edition) to learn some C. I have only gone through the first chapter so far, which is "A Tutorial Introduction".

K&R was the definition in the beginning (I used it daily for a while in the 1980's), but there are probably better sources now. K&R Second Version was for C90 (ANSII C) and not C99.

While Doxygen style comments are good for documentation, they can be overkill in some situations. A best practice is to used self documenting code and only use comments to explain why something is necessary.

When compiling the C programming language, it is better to use the -Wall switch on the compiler (report all warnings). This will find more possible issues. The line numbers for the following warnings will not work with your code because I stripped out most of the comments to get at the code. I will go into more depth for most of the warnings. The warnings I get when compile the code are:

The C Programming Language Does Not Support Variable Sized Arrays

I compile C locally with a strict C definition and there are 2 lines that don't compile in my compiler (Visual Studio 2019 Professional on Windows 10 Professional). I wouldn't try any online C compilers to be strict.

This is the section of code where the two lines that don't compile in my compiler:

The two lines are

The reason they don't compile is because charArraySize is a variable and not a constant in a strict definition of C.

The C programming language is not a friendly language and variables declared on the stack are not automatically initialized with a value. This caused the following warning message splitLine.c(79): warning C4701: potentially uninitialized local variable 'c' used. Here is the code responsible:

It is possible that the while loop will never be executed so the variable c won't have a value, it should be initialized to zero.

Use a Separate Line for Each Variable Declaration and Initialization

To add or remove a variable become much simpler in this case, simply add a line or deleted a line, not middle of the line edits.

There are a number of places in the code where there is a signed/unsigned mismatch, here is one example:

The variable len is declared as type size_t but the variable i is declared as int. This is causing the type mismatch warning and could potentially indicate worse problems (a negative index into an array). When using an index into an array it is best to declare the index variable as size_t, this prevents the variable from going negative. If the value returned by this function is used as an index, it might be better to return a size_t rather than an int as well.

The newer versions of C allow for symbolic constants to be defined using const int VARNAME = VALUE; however, in C #define is a good way to define array sizes. In K&R I don't think you will find any const int declarations. The const int method is better if this will be compiled using a C++ compiler. Macros using #define are not type safe which is why they are avoided in C++.

In this program const int TAB_SIZE = 4; could be changed to #define TAB_SIZE 4.

Since C is a programming language that is sometimes considered a very high level assembler, direct addressing is supported. In early versions of C (such as K&R C) this is how a lot of optimization for arrays was handled. Newer optimizing compilers handle this, by substituting direct memory addressing into the object code when compiling using the -O3 flag (maximum optimization). The function int columnLength(const char string[], const int tabSize) can be written using pointers which would optimize the performance:

Renamed Variables in the optimized example above
In the example above I renamed string to c_string because string is a keyword in C++ and many programmers compile C programs using a C++ compiler, also in many cases companies take existing C code and embed it in C++ programs to enhance the existing functioning code.

I renamed col to column because it makes the code more self-documenting and easier to read and maintain.

Use a newer reference

Be careful with signed vs. unsigned

You are correctly using size_t as the type for len but then comparing it to i which is declated as an int. Since size_t is unsigned and int is signed, there is a potential problem in comparing them directly because they are both treated as unsigned values, per the C standard.

The code currently contains this loop:

Omitting the braces for the else clause is permitted by the language, but it can lead to problems. See Apple's infamous goto fail vulnerability for example.

Prefer for over while where appropriate

The loop in the previous suggestion could be rewritten as a for loop:

Note that the exit condition has been changed to look for the terminating '\0' character. This saves having to call strlen and may confer a modest performance gain.

Use all uppercase only for preprocessor macros

It's not enforced by the compiler, but common practice for decades has been to reserve all uppercase names solely for macros. It's a recommended practice also in C++. See ES.9

The instructions included this line:

Make sure your program does something intelligent with very long lines, and if there are no blanks or tabs before the specified column.

When I think of uses for this program, the first one that comes to mind is accomodating long lines of text on finite-size screen. With that in mind, ignoring the line length as your program does, is probably not the right thing to do. I'd suggest instead that no line of the output should exceed the set MAX_LINE_LENGTH.

Using all of these things, and ignoring tabs, using only the 1989 version of C, we might have written the program like this:

One way to add handling of tabs to this would be to simply make a wrapper for getchar() that turns tabs into spaces.

Not the answer you're looking for? Browse other questions tagged algorithm c programming-challenge reinventing-the-wheel or ask your own question.