Working on finding a way to reduce in-cell formula size and memory usage of my excel workbook, i came up with the idea to "load" (copi-paste) the reference sheet i was mentioning a lot with a workbook open. To make it more efficient i had a loop that verifies if the sheet has changed and only copy-paste it if there a difference. I also added a LinkBreak because i didnt want the link from the ref sheet to slow the workbook i was importing it on.

The code has most likely a lot of flaws : i managed to get it working but it still doesn't feel right. Maybe you'll be able to propose me a solution.

These items won't necessarily address Excel's memory usage. I think you'd have to have a chat with MS's Excel development team to really address that. This will, however address some of the general coding issues I noticed that should help us write easier to understand and maintain code.

This is, frankly, more than a little worrying. If you don't know what the code does, either figure it out or don't use it! This one is very innocuous, and isn't anything to worry about, but you could blindly paste buggy, or worse, harmful code in and run it without knowing what you're doing.

I'd recommend using your favorite search engine with the terms msdn vba <unknown function> to find out what that function will do, something like this:

That'll take you to the MSDN documentation for the Debug.Print command. Do the same for Now to find out what it does.

I'd guess, though, that you found more than just that one line online and blindly copied it in. I'll admit, I'm not always the best at figuring out what code does just by reading it (and the docs for unfamiliar commands), sometimes I have to step through it with the IDE's Locals window open to follow the execution path and see what variables are changing and how. That's OK if you're running in debug in a development environment and you're really taking your time to understand each line (hopefully before it executes and deletes stuff or sends all your private info to someone else), but don't just blindly paste, cross your fingers, and hope for the best. Please...

We're using variables to hold references to the worksheets we're working with and that's awesome! Many just use ActiveWorksheet which has all sorts of inherent dangers. We've avoided that pitfall, but introduced others.

Hungarian Notation is bad (or at least useless) the way most people use it. (Go ahead, take a few minutes to read that to find out why, I'll wait.)

I don't know what your variables are for without reading the comments, so make the comments the variable names! Let's rename our variables to indicate what they're actually for - it makes it much easier for a future programmer (maybe even future us) to follow our code.

Avoid Variant variables whenever possible! Each time our code references a Variant, the VBE run-time engine has to analyze the data in the variable to determine what kind of data it is, then it can determine if it's legal for the function we're trying to use it for. This takes time. Maybe not a huge amount of time, but it adds up, especially in loops.

There are some times when you do need to use Variant, but holding a reference to a Worksheet isn't one of them.

We were doing so well, declaring variables, then we get to

I scrolled up to see what wbka is (an unintuitive name, possibly a typo?), and discovered that it isn't declared anywhere! VBA so "helpfully" declares it on the spot for us as a Variant. We've already discussed the evils of Variant, so we'll leave that behind. We've also discussed the necessity of naming variables so comments aren't necessary, so we'll ignore that, too.

How do we handle this? Put Option Explicit at the top of every code module you write! When you do this, the IDE will not compile your code unless you Dim every variable you use.

Setting Option Explicit is so critical that MS actually gives you a way of defaulting it on in every code module! In the IDE, select Tools from the menu, then Options, then on the Editor tab, make sure that Require Variable Declaration is checked: 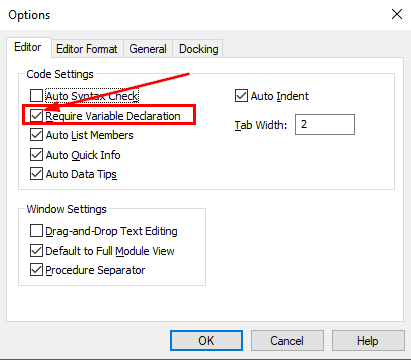 Why that's not the default setting is beyond me, but, that's what it is...

Hey, wait a minute! Those variables lied to me!!!

Those sure look like they should be referencing Workbooks, but, in fact, they're actually referencing Ranges of worksheets! Again, let's fix up the naming and the data type so we know exactly what they're for and don't need those comments.

Now we know exactly what we've got our hands on without unnecessary comments.

Not really sure what to call this one...

That pretty much hits all the points above.

Hey, let's find some efficiency in our code. Looping through cells in a worksheet is one of the more inefficient things we can do. It's much more efficient to copy them to an array and loop through the array. Excel is just slow when it comes to accessing the contents of myWorkbook.cells(myRow, myCol), but it's really quick to access myArray(myRow, myCol) so let's do that.

We've determined that we have some different data, so now we reopen the exact same workbook that we've already opened! Way up at the top, we did:

To my eye these are the same workbooks. We've already got it open and a variable wbka holding the reference to it, so let's not bother with opening it again. That will save us notable time by not getting it off the network again. That also means that we don't need the Dim wb As Workbook line, and we'll need to change all references below from wb to wbka. To be honest, though, we need a better name than wbka, so maybe we should have renamed that to externalBook or something meaningful. Maybe sourceWorkbook would be better?

Kill .Activate! Kill it with fire!!!

We were doing so well, then we hit

.Select and .Activate are fraught with potentials for errors and so easy to avoid!.

To get rid of the unqualified Sheets, we make a simple change and we have:

We're copying sheetName from the backup copy into this workbook if somebody changed this workbook. We're .Activateing and .Selecting and .Copying and .Pasteing the whole worksheet. Doesn't Excel have a nifty function to do that? Why... yes, yes it does!

All with as many lines of code as it took to describe the process and no comments necessary because the code is self explanitory.

Breaking links to the past

Hey, this is excellent! Excel is so "helpful" when it provides links back to the original workbook, except when it isn't. Frankly, I might borrow this little loop of code, I like it a lot!

I don't believe, however, that Excel will create the links when we copy the entire worksheet instead of copy/pasting all the cells. Try commenting this loop out to see if it's still needed.

The last thing we do is look for today's worksheet. This code is reasonably clean, but it's hard to read and has some small issues. The biggest issue is that the indentation is all over the place. That's been true of some of our other code, too, but it seems most egrigous here.

By reformatting the code a bit, it becomes easier to read:

Right away, we see what looks like a bug:

Even with international settings, I'm pretty sure that the parameter separator is a comma ,, not a period .. So while this will compile, I don't think that's going to work the way we expect it to.

While it never hurts to declare and use a variable, since it does make what we're doing more obvious, if we're only going to use the variable 1 time, it's really optional. That means we could, if we wanted to simplify

Additionally there's no need for us to have an Else if we're not actually doing anything in that Else clause, so we can get rid of that.

Since we're now copying the whole worksheet with those 3 simple lines, it's entirely possible that the sheer act of opening the "backup" source sheet from the network will be the longest portion of code execution.

I'd seriously recommend doing some time-based testing to see if just blindly copying the sheet will now be faster than doing all the analysis to determine if anything has changed. I have the funny feeling that it will be faster.

Not the answer you're looking for? Browse other questions tagged vba excel memory-management memory-optimization or ask your own question.

9
Matching between files and a list of filenames at scale
7
Data table retrieval and indexing (+ interfacing between workbooks)
4
Consolidate used student hours into master sheet for export
7
Audit Updating Macro
2
Printing reports for selected budget holders
3
Deleting temporary rows and columns from 21-sheet workbook
4
Copy paste from one sheet to another
2
Excel VBA code that writes to a Table - much slower than writing to a simple range
2
Loop with multiple conditions that need to be true, across two different sheets
5
Managing Excel Tables (ListObjects) with OOP Approach