I made a Three Monte Card game using Java

This is the original "ball and cups" game where you try to find out which cup has the ball under it. You may play with three cups and a ball, three cards (two jacks and an ace), or three doors and a car. Basically, randomly select a cup to hide the "ball". Let the player guess which cup hides the ball. The player wins if they guess correctly. 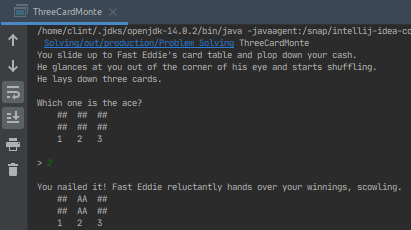 PS: I am open for corrections to make my code for efficient and clean.

your class does all things together

by this you violate the openClosed principle. If you want to change your code (eg. play a one of four game) you have to make a lot of changes. If you want to add handling for InputExceptions (see Scanner.nextInt() you would find the proper place. Make Classes for each responsibility!

A couple of constants would make your code easier to adapt. So, for example a constant for the number of cards would allow the potential to adapt the program to 2/4 card play.

To make the program easier to follow, I favour names that indicate what a variable represents, rather than where it comes from. So, rather than randomN, consider acePosition. Rather than userInput, consider guessedPosition.

When you're doing things that are identical / very similar it's a good indication that there's scope to extract into a function / class. There are two main duplications that you've got, when printing out each of the winning/losing statements with the card positions. These also share printing the end card positions. Consider extracting a method that can output the card positions, with the ace in a given position.

When you've got two if conditions that are exclusive, use if/else, rather than if(userInput == randomN) and if(userInput != randomN)