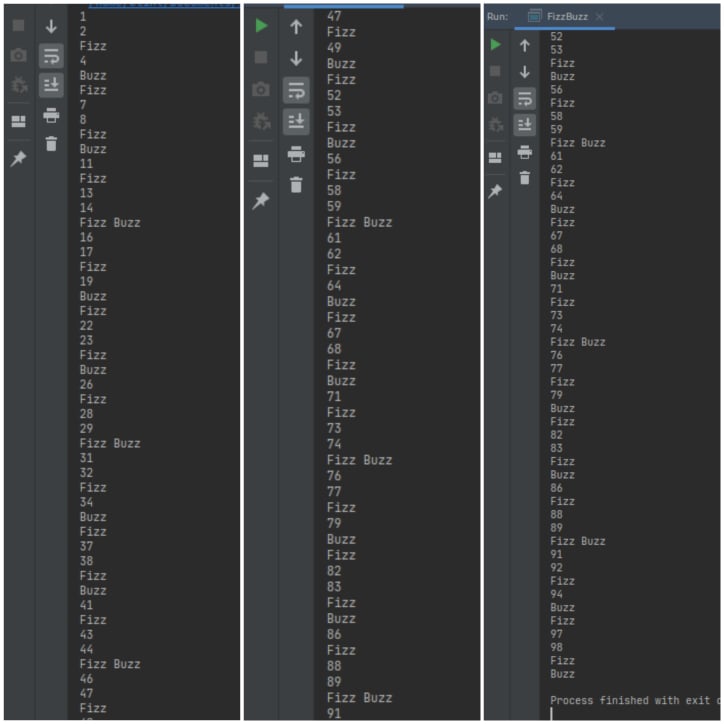 The code looks perfect, except for the variable name numbers. This variable only holds a single number, therefore its name must be number instead.

Since the variable is only used in a very small scope, the names n or i may be acceptable as well. (Subject to personal preference.)

Imagine a variant on FizzBuzz with \$n\$ different say-this-syllable-if rules. Would you want to check \$2^n\$ cases? That will lead to either a lot of code (\$O(2^n)\$ lines) or deeply nested code (with \$O(n)\$ maximum indentation). Luckily, the problem statement does you a favour: on divisibility by 15, it asks you to print FizzBuzz, not Fizz Buzz with a space as you tried. So the clean-code approach (with \$O(n)\$ lines, and \$O(1)\$ maximum indentation) is more like this:

Even in this case, where \$n=2\$, this approach has definite advantages. You easily avoid what-if-both problems, and it's obvious to a reader that you did. No need to think through boolean logic. Tom Scott discusses the advantages further here, albeit for JavaScript, not Java.

A separate issue is whether we even need all those braces.

(By the way, I depluralized your dummy variable's name, so it doesn't look like a list of numbers.)

I suggest that you extract the evaluations in variables, to make the code a bit shorter and faster .

As specified in the comments, it's not worth of talking of speed in this case, due to the optimization done by the compiler and since I didn't do any verification.

Personally, i see multiple "Tasks" in that code

The "Start" is for me an extra Task, because if i want that my application behaves differently on different environments (count to 100 on my local machine, but count to 1 Million on my super computer), than this would be a place to get the desired information and then forward it to the "functionality".
Yes this is over engineered for this small code example, but we lean with small code examples and then apply it to big applications. Therefor i like to take the big gun for small examples, as long as the goal is training. :-)

In my eyes, the following code is much longer, but its easier to understand, because each methodname gives a "context" what will happen in it. That makes it easier to follow and understand the underlying code.

Also, when the "tasks" are logically separated, then its much easier to apply changes to it. Changing the "rules" would only mean to change the convertNumber function. Changing the way it should print the result would be only to change the output method. Also it would be quite easy to extract those functionalities in extra classes, and inject them. Then it would be a breeze to decide on the outside (environment) that the output should be done via System.out.println or via a graphical interface.

But as always, many ways bring us to our goal(s). And as always if you choose one way, then you get good things, but you have to pay for them. My approach gives flexibility, but it its much more writing. The minimal slower performance would be only an argument in a high performance environment, i think, where we have to count each cycle.

Happy to hear about your opinion about my approach

For me this formatting is a little easier to read, but basically the same:

11
Fizz Buzz interview question code
6
Fizz Buzz Bizz Fuzz in Java
41
The FizzBuzz challenge in Java 8 written in a short, readable and interesting way
9
No more Fizzbuzz. How about Hello World instead?
9
Simplest way to write "FizzBuzz" in Rust
7
Finding the multiple of 3 and 5
6
Fizzbuzz of course
9
Fizz, Buzz, or FizzBuzz?
21
Yet another boring FizzBuzz
7
What's wrong with this FizzBuzz?