The most common model for a random graph is the Erdős–Rényi model. However, it does not guarantee the connectedness of the graph. Instead, let's consider the following algorithm (in python-style pseudocode) for generating a random connected graph with \$n\$ nodes:

The graph generated this way is guaranteed to be connected. Now, my intuition tells me that its expected number of edges is of the order \$ O(n \log n) \$, and I want to test my hypothesis in Python. I don't intend to do a rigorous mathematical proof or a comprehensive statistical inference, just some basic graph plotting.

In order to know whether a graph is connected, we need a partition structure (i.e. union-find). I first wrote a Partition class in the module partition.py. It uses path compression and union by weights:

Next, since we are only interested in the number of edges, we don't actually need to explicitly construct any graph object. The following function implicitly generates a random connected graph and return its number of edges:

We then estimate the expected number of edges for a given \$n\$:

Now, we can plot the expected numbers of edges against \$ n \log n \$ for different values of \$n\$: 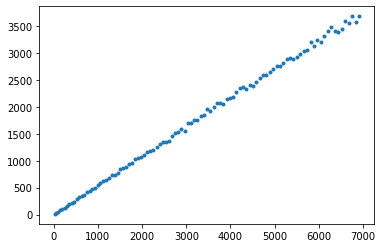 The plot seems very close to a straight line, supporting my hypothesis.

Questions and ideas for future work

"My program is slow!"

You want an estimate for \$P\$ different graph-sizes, each of which is the average of \$S\$ samples of connected_edge_count. We assume connected_edge_count will run through it's while loop \$n\log n\$ times (approximately). What's the asymptotic complexity of Partition.find()? I'll wildly guess it's \$\log n\$. So taking \$N\$ as the maximum requested \$n\$, your overall program is \$O(P S N (\log N)^2)\$.

So broadly speaking, there's just a lot of work to do. Local improvements to the implementation details can help, but I think your biggest problem (at least until you start increasing \$n\$) is \$S\$. 100 is way too big. Playing around with some values, 15 seems to give somewhat stable results, although possibly you'll want more as you deal with larger \$n\$ values.

On the other hand, how often are you planning on running this? Ninety seconds isn't really that long. It feels like a long time when you're trying to iterate on the program. So one thing you might want to work on is the way the functions are nested. Rather than having each function in the stack call the next, let them take the prior result as an argument. This way you'll have better access to intermediate results, and won't have to re-run everything every time.

I spent some time squishing around parts of the code to make sure I understood it, and then because I couldn't get the details out of my head. I haven't checked if it's faster or now, mostly it's just denser. For an academic POC, it goes up to 10K without any problems. (My main takes about three minutes to run. I still can't get connected_edge_count(10 * 1000 * 1000) to work; it crashes after a few minutes.) I'll post my version below in case there are any differences in it you find useful.

"What other improvement can I make on my codes?"
All the usual stuff. Better variable names, less mutation of state and variables, type-hints. Once I got a sense of what your code did I quite liked it; the tree system is clever. (But is it accurate? How do you know? If you're hoping to publish results, adding a few unit tests isn't going to be good enough.)

In your comments you talked about not needing to build an explicit graph; you claimed to do it virtually. But notice that you do need to keep track of all the edges so that you can count them.

Because performance is an issue, and we want to be able to handle large numbers of items, I made some optimizations that may make the code harder to read. For example, for the task at hand a List[int] (array) can serve the purpose of a Dict[int, int] with a lot less machine overhead. But it ties you representing your nodes as ints.

As for further research steps, it depends on your goals. My intuition is that this kind of sampling may be an easy way of checking if your hypothesis is viable, and you've done that. If you want to prove it, then you need to actually prove it. Maybe a programmatic proof system like agda or coq can help, maybe not; I haven't learned them yet! 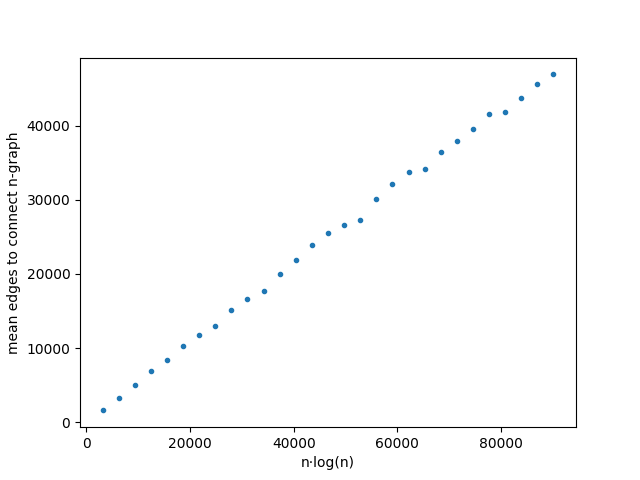 Not the answer you're looking for? Browse other questions tagged python python-3.x random graph or ask your own question.