I received a call from a client asking for a "simple app" that notified him via text message whenever a "Jeep Wrangler" is posted to Facebook Marketplace. It sounded simple enough, so I took the gig. I figured I would leverage FB's Graph API or possibly simply set up a filter in his account, or something along those lines.

It wasn't long until I faced reality. This was going to be harder than I thought.

I ended up deciding to write a screen scraper. I chose NodeJS, Express, and Puppeteer to do this. 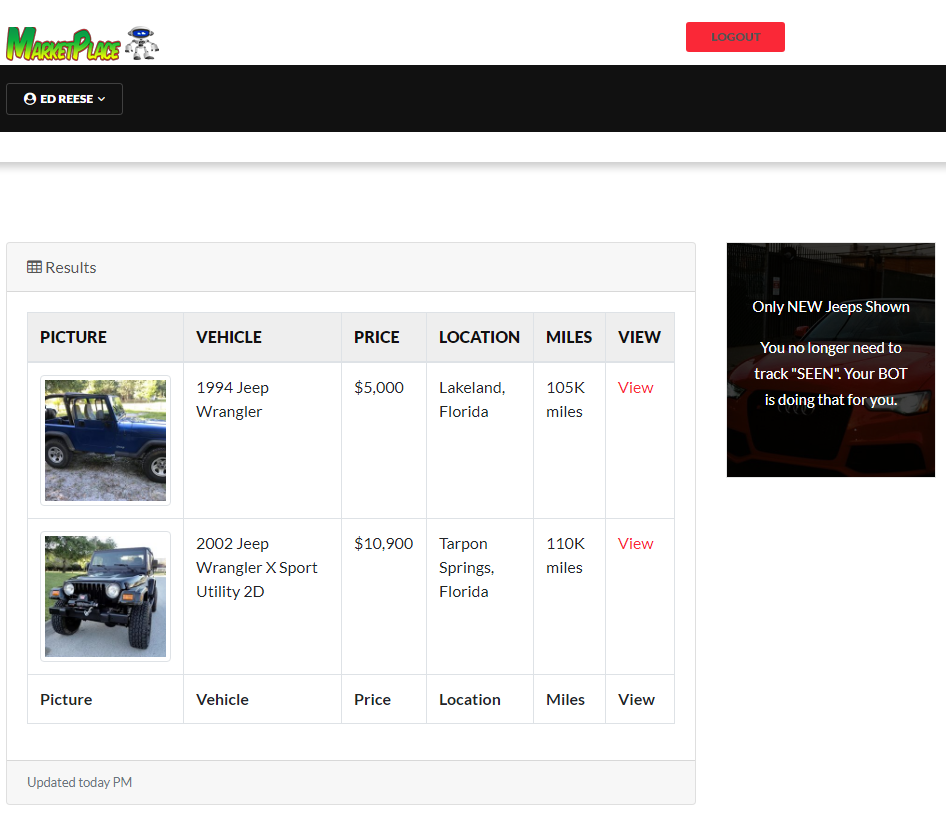 When I was almost done with the app, I realized I could not use JSON as my data storage, as I intended. Heroku apparently uses Dyno's that sleep, and data does not persist. I don't fully understand it, but I had to take a different approach.

Well, this is what I came up with so far. I am pretty much done, I just need to fix my HTML page to use <% %> tags to display the data.

Any criticism , good or bad, welcome. I wonder if this could have been done better, more efficient, etc.

One thing that stands out to me is the database itself. It's somewhat ugly for something that sounds like it only really needs to keep track of one thing: a unique identifier for each truck viewed so far (such as its page URL), if the client wants to be alerted on new postings, and not on edits to old postings. If it were me, I'd set the script up on my own server, which does have a persistent file system, and then it'd be trivial to save and retrieve the URLs seen so far with JSON.stringify/JSON.parse with a tiny local file. If that's not possible, you can still make things simpler by saving just the URLs of each truck into the database, then checking whether the URL of a truck found on the page exists in the database yet or not.

It's pretty much never a good idea to directly concatenate input to construct the SQL query string:

It's not only inelegant, when done wrong, it can lead to (inadvertent) SQL injection and other troubles. Consider using parameterized queries instead.

You might also consider using Redis instead of a database, I think it might be a slightly better choice, especially if you just need to store an array of URLS. I believe you could do something like:

where lrange and push, Redis methods have been promisified. (By default, they use callbacks, just like your existing pool.query.) To convert a callback API to a Promise, either use util.promisify (recommended) or do it manually. (Your current getPreviousItems and saveToDatabase are not promisified, so they resolve immediately, rather than when the action is complete, and don't resolve to anything.)

In your initScraper function, there's no need to assign to a variable that isn't going to be read before it's reassigned:

Better to declare the variable only after the value to assign to it is retrieved:

Note the use of const. You're sometimes declaring variables with var, and sometimes with const. If you're writing in ES2015+ syntax (which you are, and should be), you should always use const to declare variables: var has too many gotchas to be worth using, and is less readable than const (since with const, you know that a variable is never going to be reassigned). If a variable must be reassigned, declare it with let.

Make sure to handle errors - unhandled Promise rejections are deprecated and in the future will cause the Node process to terminate. Best place to handle them would probably be at the entry point, the initScraper call:

I think the only thing left to look at is the getItems function.

The reassignment of the global browser variable used both in getItems and initScraper is somewhat smelly:

Consider constructing the browser in initScraper instead, and then pass it to getItems - that'll let you declare it with const, and avoid an unnecessary global variable. page doesn't need to be global either - it's only used inside getItems, so feel free to declare it with const inside.

You have a couple of very specific selectors. If they work, that's fine, but the slightest tweak to Facebook's HTML will cause your script to break. You might consider using the descendant selector instead when possible, and with something more specific than tag names. For example, it would be great if you could replace div > div > span > div > a[tabindex="0"] with a selector similar to .listContainer a[tabindex="0"] where listContainer is a class on an ancestor element - look through the DOM to see if something like that is possible. (Rather than repeating this selector twice, save it in a variable first, then reference that variable.) Same thing for itemImg's selector - you might be able to replace

It's best to avoid .innerText unless you're deliberately looking to invoke its strange text styling rules. See if you can use textContent instead, which is the standard method.

If you're iterating over all elements of an array to construct a new one, it's more appropriate to use Array.prototype.map (from which you can return the item for the new array) than to use forEach and push. (See below for example.)

The reduce there is really weird. If you have an array of values that you want to put into an object with particular key names, using a plain object literal by destructuring the split call would make more sense (see below for example).

In full, getItems can be made to look something like the following:

Not the answer you're looking for? Browse other questions tagged javascript node.js web-scraping or ask your own question.