Coded the Game of Life

The way I am approaching this is by making a boolean[][] array grid with true representing an alive box and false representing a dead one. The view class takes this boolean grid and turns it into a grid of boxes that are either coloured white or red (white = dead)(red = alive).

You are not assigning default values to the fields and you are splitting game logic and UI. That's a good start.

In a public function or constructor I expect clearly named parameters.

Generally we simply use this.width = width instead, so we don't have to come up with a different variable name.

Beware of exposing your state. The reference to the grid is copied, but the arrays are mutable! Either clone or expose the state in another way (e.g. using an enumerator or by referencing grid cells separately using coordinates).

It's a bit weird that you can set the genCount during the game of life. Again, setGen and gen may not really be clear to the user. gen may also have any value apparently, allowing the object instance to have an invalid state. I'd rename genCount to generation, so away with gen altogether and remove this setter.

This is OK-ish, but I prefer to check if probabilities are between 0 and 1 inclusive (yeah, I know, Java is rather heavy on boilerplate code).

This seems near identical to getGrid. But more importantly, if I make a copy of a game then I don't expect a grid in return. This method is in dire need to be made private anyway.

Just newGrid is only 2 characters extra. Don't overly skim on characters (and possibly learn how to touch type).

Use System.arrayCopy() at least for the inner loop instead.

Ugh, here are the i and j again, but now j is the X-coordinate while it was the width before and i is the Y-coordinate.

Furthermore, what about two constants? DEAD = false and ALIVE = true? Using an enum is also possible (enum Cell { DEAD, ALIVE; }), so that false and true cannot even be used anymore.

This I like, good method name, and a method that is sorely needed here.

Lovely, side effects right at the end where they belong.

Note that floorMod is the modulus operation while % is the remainder operation which will return -1 if the left operand is -1. That's not what you want, you want width - 1 or height - 1 instead.

Now I hope that looks a bit easier on the eye. You may want to rename dx to deltaX and nx to neighbouringX or something like that, but there is such a thing as overdoing it too. For local vars you may be a bit less strict (fields and parameters are more important for sure).

Note that I didn't know that the game of life uses wrapping, but that's another matter I guess. I'll not go on about the strategy design pattern, that might be a bit too deep.

I think your design would look better if you split your game of life into a Game and Grid class. That way the method naming would be much easier.

Finally, currently your game of life only operates when redrawing the window (or JFrame in Swing talk). That's of course not how it should be, it should be running on a timer and/or using buttons.

I made some modifications to your View class and created this GUI. 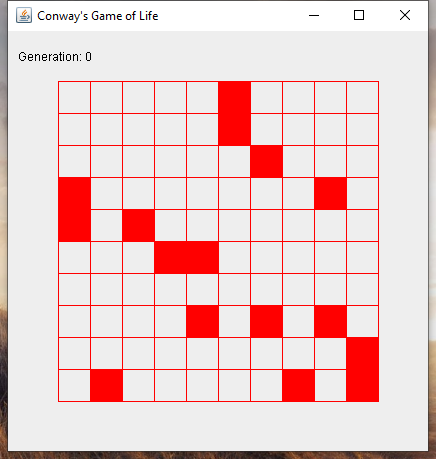 Here are the changes I made to your View class.

I created a new Timer class to update the GUI every 5 seconds. Since the GUI never changed, I put a System.out.println method in the timer loop to make sure it was running.

You can change the 5 second delay if you wish.

I would recommend changing how your grid is represented in memory. Imagine you have a 10000x10000 grid and just 1 cell at coordinates (5,5) that's alive.

If you use an array to store that information, you have to create thousands upon thousands of data points pretty much all of which basically say nothing but “nothing to see here”. Dead cells are the default and therefore there's not really much we need to hold in memory about them.

So let's use a HashSet that only stores the alive cells. If the HashSet contains a given coordinate, the corresponding cell is alive. Otherwise the HashSet returns false, meaning it is dead. Now you can have a virtually infinite grid which, especially if mostly empty (as a Game of Life usually is), hardly needs any memory.

My Java is super rusty so consider the following something like pseudo code, but you get the idea:

Obviously you can now continue to encapsulate other grid-specific functions and make your Game class simpler and better readable.

I can't speak to the Java-related aspects of your solution, but you've got one problem that would be an issue in any language: you're performing far more dynamic allocation than necessary.

In your case, you know exactly how much space you need: two grids of width*height space each. Instead of allocating a new grid every generation, just allocate the space you need at game startup. With each generation, swap which one represents the current state, and which one represents the next state. You can do this by allocating grid as a three-dimensional array, or by allocating two grids and swapping references, or whatever other method you think is easiest.

A few quick notes on newGen(). The main one is you're calling getNeighbours twice in the cell-was-alive case, meaning you're doing double the work to count them when the value can't change. So you should only call it once and save the result in a variable, and since you're going to need the count in all cases so you can do it once before the if:

I'd then continue with the 'alive' case since it's the 'true' case, but that doesn't really matter. Sticking with what you had, this becomes

But as it stands you're copying the grid and then setting or resetting it for changes whereas we do explicitly know whether each cell is dead or alive in the conditions. If we change this to:

then we're always setting the cell in nGrid, meaning you no longer need to copy the old grid: you can just allocate an empty array instead.

Or we could simplify this condition further:

or even flipping the logic slightly:

although I appreciate the previous way is a clearer statement of the rules.

Not the answer you're looking for? Browse other questions tagged java game-of-life or ask your own question.