Maximal Char Requests in a String

I have been trying to deal with this problem set, and I have figured out how to solve it as well. But there is one problem that is Timeout error for some hidden cases, but no wrong answers

In this challenge, a string and a list of intervals are given. The string consists of English letters only and it can contain both lowercase and uppercase letters.

The task is the following. For each given interval, you need to find the count of the greatest letter occurring in the string in that interval, ignoring the case of the letters, so occurrences of, for example, a and A are occurrences of the same letter.

The first line contains integer N, denoting the length of the input string.

The third line contains an integer Q, denoting the number of intervals. Each line of the Q subsequent lines contains two space-separated integers xi and yi, denoting the beginning and the end of ith interval. 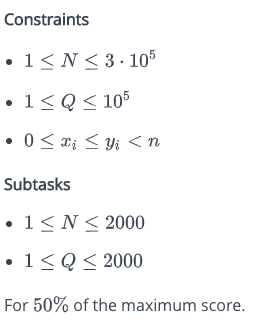 For each interval, print the count of the greatest letter occurring in the string in that interval. 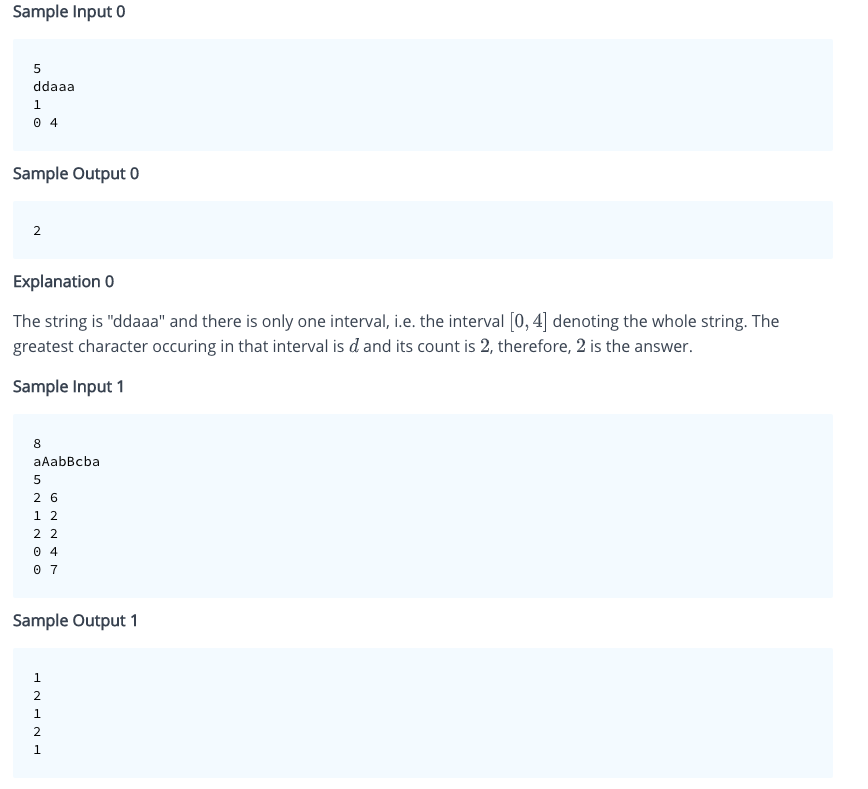 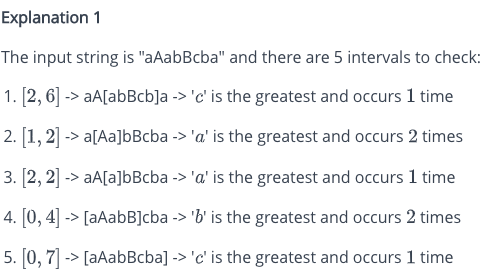 Any help would be appreciated

The Style Guide for Python Code’s naming conventions recommends again mixedCase identifiers. CapWords are for classes and types, snake_case is for functions, methods and variables. Thus, getMaxCharCount, maxCount and finalWord should be renamed to get_max_char_count, max_count and final_word.

string is an importable module in Python. Its use as an identifier should be discouraged.

interval is a perfectly fine variable, but interval[0] and interval[1] are confusing. Are those the zeroth and first intervals in a list of intervals? It would be better to unpack the interval immediately into the starting and ending values of the interval. This can even be done directly by the for statement:

If we remove the special-case, your code reads approximately:

This pattern is usually re-written using list-comprehension, since it is much faster than repeated calls to .append():

The only issue is what should be used in place of .... Prior to Python 3.7, there was no easy way to refer to the result of a computation multiple times in one expression. Python 3.8 introduces the “walrus operator” (:=) which allows variables to be assigned inside of other expressions. We can use this to avoid referencing and slicing final_word twice:

This code may be slightly faster than your original code, with the speed up mostly from replacing .append with list comprehension. To really see significant speed gains, you need to improve the algorithm.

Since this is a coding challenge, I won’t give you code for the better algorithm, but I will get you started in the right direction.

How many times are you looking at any given character of final_word?

Can you see any way of computing intermediate results and reusing them?

3
Output strings from a set in lexicographical order
10
Find if the string contains ALL the vowels
3
Finding the index of the character whose removal will make a palindrome
4
Find the number of substrings of a numerical string greater than a given num string
2
Union and intersection of two arrays
3
Strings: Making Anagrams
1
Play With Numbers Programming Challenge (mean value of subarrays)
3
Given an integer array A and a range, find a subarray within the range with a minimum sum
3
Encoded string algorithm with given rules