Given a binary tree, return the sum of values of its deepest leaves. 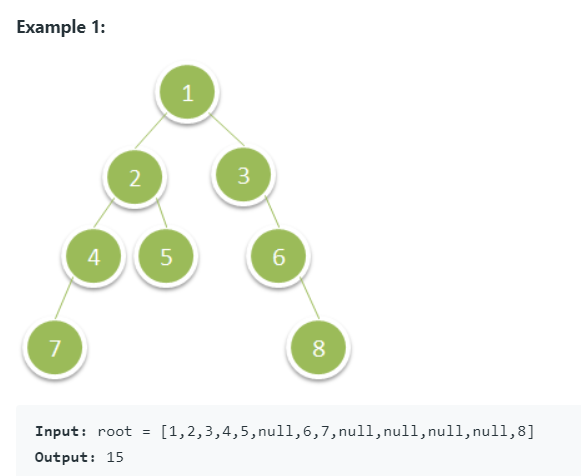 Please review for performance and style

This solution seems generally fine although it's not much code to analyze and it's already as succinct as it could reasonably be.

Basically, you've introduced two class variables on an object as a shortcut in order to keep your algorithm clean and easy to write, but this design adds complexity to the caller and makes the class brittle.

One solution is to use the ref keyword to keep all data local to the calls:

This is more verbose, but the benefits are worth it. You can also argue that ref makes the programmer's intent clearer to help justify the extra verbosity and added parameters.

Kudos on keeping the recursive helper private. However, a name like DFS seems too generic--it does do a DFS, but it's specific to summing deepest leaves. As the BinaryTree class grows to contain dozens of methods, it'd no longer be obvious from the name that DFS is related to SumDeepestLeaves. Overload the SumDeepestLeaves method so there's no doubt.

You can also do this using a BFS instead of recursion using the level-order trick where each iteration on the queue dumps the entire level, queuing up the next round and summing the current. This isn't definitely better, but at least there's no refs and no helper function, so all the logic is in one place, and it's worth knowing about in any case.

The order of depth + 1 and maxDepth is different between the Ifs. One time maxDepth is on the left side and other time on the right side.

Usually, when writing recursion, you return the value and not store it in the class.

If you call DeepestLeavesSum twice with the same object the second call will return wrong results because it will use sum and maxDepth of the first call. A good practice is avoiding saving state.

Not the answer you're looking for? Browse other questions tagged c# programming-challenge binary-tree or ask your own question.

0
At least 2 paths down the binary tree have the same sum
3
LeetCode: maximum-depth-of-n-ary-tree
10
Recursive search on Node Tree with Linq and Queue
10
Earliest time frog can jump to the other side of a river in C#
7
Strongly typed unit system in C#
3
LeetCode: Most Frequent Subtree Sum
1
LeetCode 1146: Snapshot Array
4
LeetCode: Insert delete getrandom o1 C#