I took some time to try and solve a problem. I am building a basic Node + Express API. In the app I have created a models folder and will be adding new models as I continue development.

I attempted to write a small autoloader for a directory to automatically load and export my models. This code snippet should work for any modules not just my models folders.

My folder structure for the models: 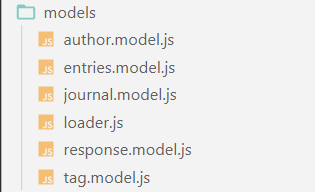 How I import the models into my Routes file:

Is this a good idea to do something like this? My reasoning is that it would minimize changes when I commit and not require any modifications to my code should I decide to add new functionality to my routes and models folders.

What caveats are there to doing this and would there be a better approach?

Thanks for taking the time to look at this!

The major reason for not doing this is that dynamically requiring modules breaks static analysis.

In a pure Node.js project, this does not have major repercussions aside from breaking IDE's autocompletion. Everything else will still work as expected.

Should this pattern be used in a webpack project for instance (targetting server or client), it would fail, as bundlers need to statically compute the dependency tree at compile-time.

The require() function (CommonJS) was implemented in Node because, at the time, the core Javascript language didn't have the concept of modules. However this has changed, as ES modules are now available in all evergreen browsers, and in Node 13.x without a feature flag.

The new keywords import and export do not support variable interpolation for the purpose of static analysis, and are even required to be declared on top of the module. In practice, this makes the patterns if (dev) { require('debug') } or require(name) unusable, once adapted to ES modules.

In my opinion, this is a case where anything “clever” you try to make will just make the code harder to read and maintain. I've been down that path too, and I can tell you that the long-term costs are not worth the 2 seconds it will take you to add manual exports to your files. In my experience, reading code is 10 times more costly than writing it.

You also don't even have to create index.js loaders; you can require the files directly. Ryan Dahl, creator of Node, even said at JSConf 2018 that he considered the addition of index.js a mistake because “it needlessly complicated the module loading system.”

Good luck, and be kind to future-you.

Not the answer you're looking for? Browse other questions tagged javascript node.js express.js modules or ask your own question.