PHP coder here. Learning JavaScript this week. I made a sudoku game for practice. Features:

Things I'm hoping to gain from this Code Review. 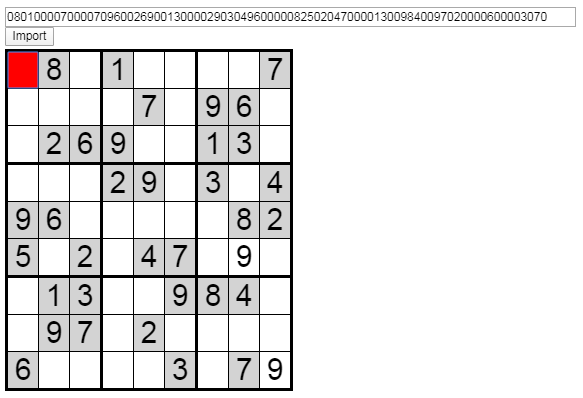 The code is mostly easy to read- indentation seems consistent, though the CSS rules are not separated by new lines - a common convention among many style guides. There are a few comments and many functions/methods are self-documenting but it would be good to comment each function/method to be thorough, especially if you intend to have others utilize the code.

It looks like some ecmascript-6 features are used - e.g. Classes, but more could be used- e.g. the spread syntax, default parameters, destructuring assignment and perhaps arrow functions, etc.

Some variables are actually declared as global - e.g. game1, import_string, etc. - since they are not contained inside a function. That is likely not an issue for a small application like this but in a larger application it would be wise to limit the scopes (e.g. inside an IIFE, DOM-loaded callback, etc. to avoid namespace collisions.

The biggest thing I notice that is sub-optimal is this block:

Not only is that line inside the nested loop excessively long, but it means there are 81 DOM lookups just for the first element with class sudoku, plus DOM lookups for each of the child elements. 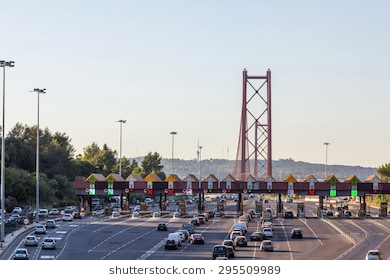 ”...DOM access is actually pretty costly - I think of it like if I have a bridge - like two pieces of land with a toll bridge, and the JavaScript engine is on one side, and the DOM is on the other, and every time I want to access the DOM from the JavaScript engine, I have to pay that toll”
- John Hrvatin, Microsoft, MIX09, in this talk Building High Performance Web Applications and Sites at 29:38, also cited in the O'Reilly Javascript book by Nicholas C Zakas Pg 36, as well as mentioned in this post

Similar to PHP’s foreach loops, for..of loops could be used instead of the for loops to avoid having to manually increment the counter variables.

The method blank_board_array could be a static method since it doesn’t need to reference any state of the instance. The same could apply to some of the other helper functions. Additionally, createArray() could be used instead of blank_board_array(). And that could perhaps be simplified by utilizing Array.fill().

Instead of using let for all block-scope variables, it is wise to default to using const to avoid accidental re-assignment. Then when you determine re-assignment is necessary use let (e.g. for counters, etc.).

The mouse up event handler for the import button starts with this line:

It would be simpler to add an id attribute to that element and then use document.getElementById() to reference it- that way there is no need to fetch a collection of elements just to get the first one.

If all elements were wrapped in a <form> tag then that element could be referenced by document.forms[0].import_string but then you would have to ensure the form didn’t get submitted.

Also it would likely be wise to use the click event instead of mouseup - that way if the user preferred using the keyboard to tab through elements it would allow pressing the Enter key to also trigger the event handler.

The e.g. the spread syntax could be used to transform this:

Or Array.shift() could be used to take the first argument off the array, eliminating the need to call slice().

Or use destructuring assignment to assign those variables.

There is one CSS rule containing !important:

It is best to create a rule that is more specific than any others instead of using !important.

When an important rule is used on a style declaration, this declaration overrides any other declarations. Although technically !important has nothing to do with specificity, it interacts directly with it. Using !important, however, is bad practice and should be avoided because it makes debugging more difficult by breaking the natural cascading in your stylesheets. When two conflicting declarations with the !important rule are applied to the same element, the declaration with a greater specificity will be applied.1

There happen to be no other border-right rules that need to be overridden so that keyword can be removed here.

The table rows and cells have class names like “1”, “2”. I don't see any CSS or JavaScript that utilizes those class names. While "CSS2.1 it is a recommendation, even in CSS3"2 class names should not start with a number:

Property names and at-rule names are always identifiers, which have to start with a letter or a hyphen followed by a letter, and then can contain letters, numbers, hyphens, or underscores. You can include any code point at all, even ones that CSS uses in its syntax, by escaping it.3

To add to existing review a few points I noticed:

Let's start with some convention things, in JS we (everyone) write function and variable names as camel case.

I see you have a comment that you tried to use a setter, the issue is that you would then want to use it in two ways. You would want to write this.board = import_string to call the setter, but in the constructor you do

You could use a setter with some rewriting, but I think it's fine as is.

The double equals in JS == coerces the types, so that for example 0==[] is true, while this can be useful, in my experience it fits squarely in the realm of being too clever, or of things working coincidentally. I would advise you always use === which does not coerce types (but controversially to my colleagues I write lines like if (x === false), some say this is a step too far).

I would suggest that it would be nicer to have functions which create an html Sudoku board, i.e. rather than target elements that happen to be there, you can make the elements with JS and then add a single element (with many children) at the end, if you do this you can also tidy up the logic of setting up the event listeners a lot too.

In general there's been a trend (at least in my experience working) towards writing quite functional code in JS. Your stuff is far removed from that, not really a problem, just something to be aware of.

It's a bit hard to give an example without just rewriting everything, but for instance (though the example I will give is still not very functional) several times you loop over a 2D array, you could write a function loopOverMatrix(matrix, f) which takes a 2D array and a function f (i, j) => {...}, and loops over all the elements [i][j] and calls f(i)(j).

Not the answer you're looking for? Browse other questions tagged javascript html css ecmascript-6 sudoku or ask your own question.