I'm very new to Entity Framework Core, so I'm concerned about whether I've done this query in the most efficient way possible. 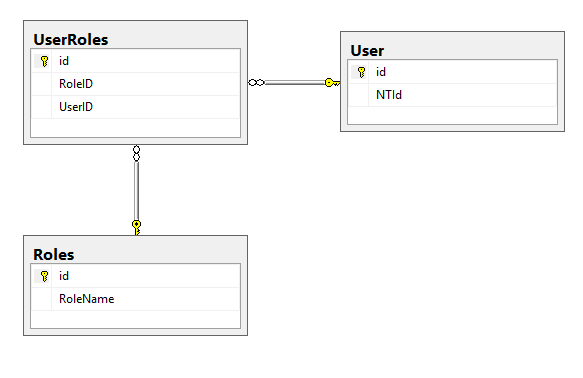 Basically, UserRoles is a a "linking table" between the User and the Roles in order to create a one-to-many relationship. If a user exists at all, they will always have at least one role, but they could have several roles.

I want to get the role name based on the NT ID of the user.

This is something I plan to do fairly often, so I separated it out into a separate utility (rather than having it in the controller).

In SQL, I'd just do two inner joins. However, what I did here is to query UserRoles (rather than using Join).

Ive tested this and it does what I want, but I'm wondering if this is the best way to do this. For example, would it be better to use an explicit join instead?

One exception to this rule is when you want to overrule the ORM's SQL generation. Entity Framework will generate an OUTER JOIN for non-required navigation properties (i.e. where the "1"-side is optional, 0..1-n, 0..1-1). There may be cases where INNER JOIN performs better and the results with null navigation properties aren't interesting anyway. In those cases, using a manual join, overriding a navigation property, could be considered.

Side note: as said in a comment, it's recommended to use disposable objects, like a DbContext, in a using statement.

Not the answer you're looking for? Browse other questions tagged c# beginner asp.net-core .net-core entity-framework-core or ask your own question.