The output is a random sequence, and the input is the sum of the sequence.

It seems strange to create a buffer out of the function, so how can I improve it?

1. Comments on your code

And here are some example calls:

3. Comments on your design

Supposing that you wanted to sample the space of ordered integer partitions uniformly, how could you implement it?

First we have to know how to count ordered integer partitions. And to do that, there's a neat combinatorial observation. Consider a group of objects waiting to be partitioned: 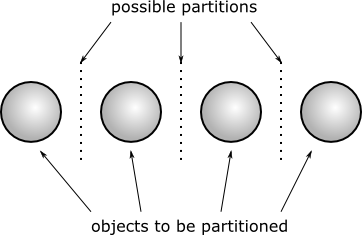 If there are n objects, there are n − 1 locations where you could insert a partition (indicated by the dotted lines). For example, if we insert partitions at the first and the third locations, we get the partition 1, 2, 1:

Here's a revised function that implements the new algorithm:

And here's an example distribution after a million calls to the revised function:

You'll see that this is very close to uniform.

Again, I should emphasize that since I don't know what your function is going to be used for, I don't know whether changing it so that it samples uniformly from the ordered integer partitions is the right thing to do. But if it is, now you know how to do it.

(Who would have thought there would be so much to write about a six-line function?)

Anyway, if you want to generate a sample from this distribution, the easiest thing to do is to simulate the process directly:

This distribution looks like this (again, after generating a million samples):

Not the answer you're looking for? Browse other questions tagged python random or ask your own question.

13
Quasi-random sequences: how to improve style and tests?
3
Zeros in Factorial
10
Generate set of random numbers and remove lowest
1
Finding shortest sequences of integers whose product is larger than n
3
Generating a random coordinate (x, y) inside of a given polygon/area
6
Find good numbers in a given range
7
Pseudo Random Number Generator
3
Wiggle subsequence from leetcode
8
Calculating the Average Minimum Length of Random Numbers From 0 - 1 that Adds up to Greater Than 1
9
Hash table solution to twoSum