Implementing a class hierarchy and instancing the base class in VBA 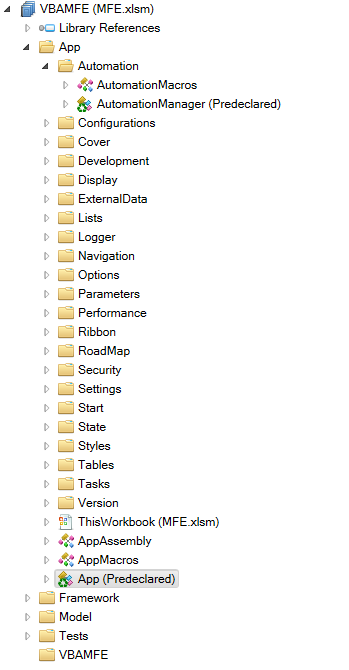 Description: This is the function that I call to access the classes in the whole application. 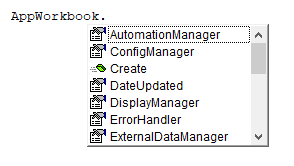 And call a function from one of the sub classes:

Avoid using the : instruction separator in code. That's good for golfing up quick throw-away code in the immediate pane, not for production code.

Statement syntax is fine when the Then part is a single statement - if it gets any more complex than that, block syntax should be used for clarity and maintainability (much easier to add statements in either conditional branch):

It's not clear where DebugMode is defined, but it's clearly not a conditional compilation constant... which means the compiled code includes these debugging helpers. Not a big deal, but essentially the equivalent of shipping a release with the .pdb debug files.

Consider defining DebugMode as a conditional compilation constant, and then the condition can be conditionally compiled, resulting in this code with DebugMode=1:

...and this code with DebugMode=0:

That way no opcodes will be generated for the dead code when DebugMode is toggled on or off, and no condition needs to be evaluated at run-time; static code analysis (Rubberduck) will not see the dead code either, so StopKeywordInspection will only fire a result when DebugMode = 1, which can make a great heads-up that you're about to release code that includes instructions that were intended purely for debugging purposes.

Avoid noisy banner comments - especially if they're just there to eat up screen estate:

Consider grouping all module annotations together - either above or under Option Explicit... just not on both sides of it: the day [future] you (or a future maintainer) want(s) to add a @ModuleDescription annotation, if annotations are scattered everywhere then new annotations will just end up being added wherever they're added.

Note that @Version isn't a legal Rubberduck annotation, and very likely will never be one: version information (and copyright, authorship, license, diff history, etc.) does not belong in source code. It belongs in a source control repository. If your code isn't under source/version control, then what does a "version" mean anyway? I'd just remove it, it's a noisy comment that poses as a Rubberduck annotation, likely flagged by the IllegalAnnotation inspection.

ReplaceStringInWorkBook is iterating ThisWorkbook.Queries, which makes it very, very misleading. Since it's Private, I'm struggling to see what justifies @IgnoreProcedureNotUsed here - a private method with a misleading name that isn't invoked from anywhere, is dead code that needs to be removed.

A Public procedure (wait why is it in the middle of a bunch of Private methods?) in a framework-type project might be legitimately unused, but the AssignedByValParameter is a real concern here:

By assigning to the supplied parameter, the rest of the procedure loses the ability to tell what the supplied values were. Whether or not the rest of the procedure needs that knowledge makes no difference: the Optional parameters are suspicious and make the public API ambiguous and adds implicit behavior to the calling code... and implicit behavior in an API, while pretty common in the Excel object model, should be avoided like the plague in any modern piece of code. If you don't want to declare and assign local variables instead, consider making the parameters non-optional, and raising an error if FromWorkbook or ToWorkbook isn't specified. If you really need a method that does this with ThisWorkbook, consider exposing a TransferQueriesFromThisWorkbook method that makes it explicit, doesn't take a FromWorkbook argument, and simply passes ThisWorkbook as the first argument to TransferQueries.

Consider ditching the "Manager" suffix - see I Shall Call It... SomethingManager on Jeff Atwood's Coding Horror blog for more information.