Simulate namespaces in VBA and access functions like if you had a Framework setup or at least that was what I understood...

I was inspired by this piece of code: Framework.Strings.StartsWith in this post 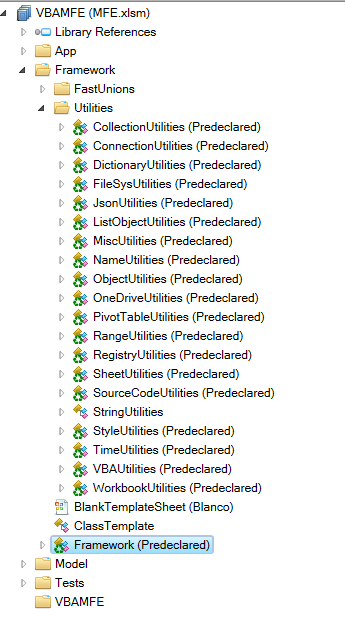 It's tradeoffs. On one hand you get useful static methods in a toolbox, functions that don't accidentally show up in Excel's IntelliSense in the formula bar. On the other hand, you could get the very same out of a standard module with Option Private Module specified, minus the possibility of client code mistakenly attempting to create a New instance of the class... and since class modules are either Private or PublicNotCreatable, the best way to implement this Framework namespace would be to have an Excel add-in VBA project named Framework, exposing these predeclared instances to whoever wants to consume its members. The cost for using classes is a LongPtr per instance - the actual size of that pointer depends on the bitness of the host application... and it's negligible.

The main difference between a class and a standard module is that you can pass an object reference to a procedure, but you can't pass a module; you can't declare a variable As that module "type", New it up (in the same VBA project, accidentally or not), or make it handle events or implement interfaces.

I think framework-level static/shared functions, in VBA, feel right at home in a standard module.

You would use classes in a Framework add-in to encapsulate some state - you could have a ProgressIndicator class exposed, for example, that registers a worker method that never needs to know anything about any ProgressIndicatorForm, and even less about any MSForms.Label control's Width. You'd have a StringBuilder class, a FileWriter class, a SqlCommand class - you want classes that represent & encapsulate some data and implement some behavior, and modules that group related procedures together... but why not have a custom collection class (some List perhaps) that exposes all the things you ever dreamed a Collection could do, instead of a CollectionUtilities class/module?

Maybe it's just the "utilities" name ringing a "bag of whatever" ring to it, but having Utilities in the name of every module feels like redundant suffixing, I find.

You want an @IgnoreModule ProcedureNotUsed annotation at module level here, rather than having an annotation on every individual member - that way it's much easier to toggle it back on if you choose to leave that code as a bunch of modules to import in every new project (rather than an Excel add-in you'd reference): these Rubberduck inspection results are telling you which members can be removed from this particular project; no need to bloat up a project you're distributing with a whole framework!

It's not clear what the difference is between IsIn and HasItem functions - both feel like just slightly different solutions to the same problem (although I suspect you removed an On Error Resume Next from JKP's code, since that function can't return False without throwing error 9), and that makes a confusing API. I'd keep HasItem but swap the IsObject check for an Err.Number = 0 check.

Variables could be declared closer to where they're used in a few places, especially in TableRowToCollection.

Since this is a framework, there's an opportunity for every public member to have a short @Description annotation comment, and for modules to have a @ModuleDescription.