Manage what happens when users interact with Excel Tables (ListObjects)

I combined Matt's solution but ended up with another class (Tables) to store the instances of each Table created so this could manage multiple tables in a Sheet, so I'm not sure if this part could be simplificated. 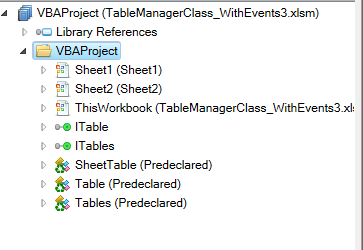 I find relying on Sheet.Activate / Sheet.Deactivate to set/unset the sheetTables reference is rather frail, error-prone (miss an Activate event for whatever reason (Application.EnableEvents being toggled off, for example), and just like that the Change handler starts throwing error 91), and doesn't really make much sense: the table exists on Sheet1 as long as Sheet1 does, no?

In that case, then why do we need to re-create the wrapper every single time any cell is modified on that sheet? This method should run once, for the entire lifetime of the worksheet: I'd do that in a Workbook.Open handler.

When present, a factory method should be the first member listed, followed by the public members of the class' default interface.

Note that the .AddTables member call is made against the Tables interface. ITables is weird:

Class modules that are intended to be used as abstract interfaces should have an @Interface annotation; Rubberduck's static code analysis will then treat it as such, whether or not the interfacec is actually implemented anywhere.

But the weird thing with this interface, is that it's exposing the factory method, which is normally invoked off the default instance of the concrete type... like you do here:

A factory method on an abstract interface would be legit if we were looking at an Abstract Factory - but that's not what we have here, this factory method is yielding the concrete type (Tables) ...and yet the actual factory method you're using does yield the ITables abstraction.

AddTables doesn't belong on that interface either: it's an implementation detail of the Create factory method, which itself belongs on the concrete type - none of the members of ITables belong on ITables.

These would all feel right at home on that interface though:

...with a reservation for sheetTables As Collection: exposing a Collection means the client code is able to .Add and .Remove items, and you certainly don't want to allow that. Consider exposing it as an indexed property instead:

Now given a name or index, retrieve the ITable item and return it. Also consider exposing a NewEnum member (and yield sheetTables.[_NewEnum]) with an @Enumerator annotation (sync attributes through Rubberduck inspections), and then the client code will be able to iterate the items in this custom collection class, with an idiomatic For Each loop. The name Tables, pluralized, strongly suggests that it's a collection of tables.

Or you could introduce some ReadOnlyCollection class with a Create method that takes a ParamArray argument, with logic to initialize the encapsulated collection with the specified items (could be an array or collection - I'll leave the implementation up to the reader), and then there'd be no problem exposing such a read-only collection that can only be iterated.

Not sure what the purpose of this eval/Eval prefix is:

The objective clearly isn't related to preserving the camelCase or PascalCase of parameter names, so I'm left baffled as to why it's not just table and cell. Actually, since these members belong to Table which is wrappping a ListObject, ...I think the ListObject parameters should be removed - if these functions really belong in that class, then they should be working off the this.SourceTable instance field.