C# Windows Forms App: Adding An Element To The BindingSource And Save These Changes To The DB [closed]

Code not implemented or not working as intended: Code Review is a community where programmers peer-review your working code to address issues such as security, maintainability, performance, and scalability. We require that the code be working correctly, to the best of the author's knowledge, before proceeding with a review.

I have build a C# Windows Forms app that used Entity Framework(DB first model). For the data I am using a .mdf database file.

The data view of dbo.students: 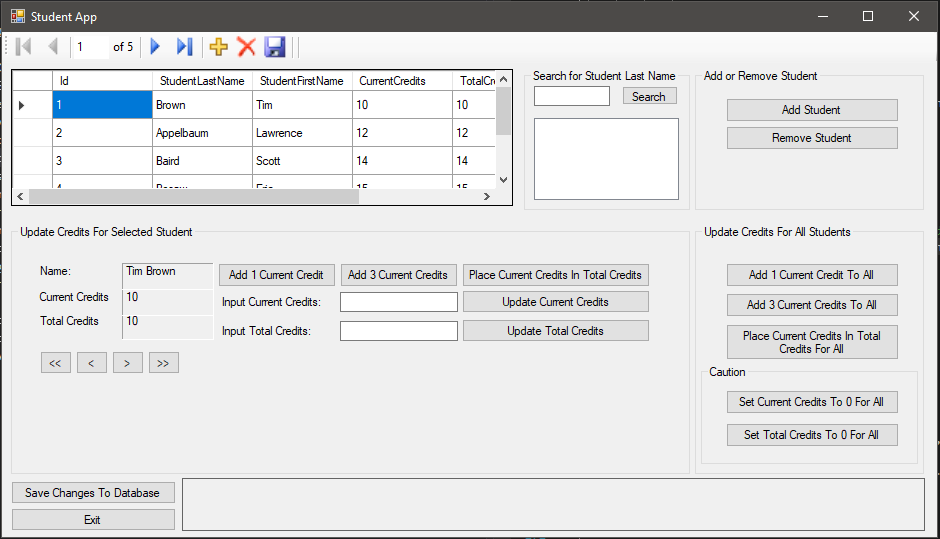 The app runs but not as expected...

These are the bits I am having trouble with:

The student object is then created & provided with values in Form2.

After having added 2 new students & set all current credits to 0 in the BindingSource: 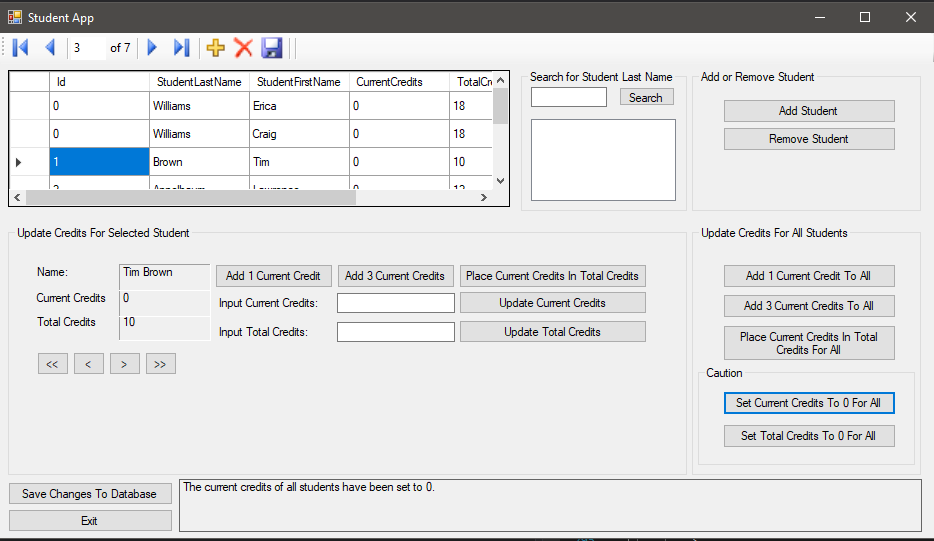 The data view of dbo.students after saving the changes made to the BindingSource:

As you can see the changes made to the students credits changed. But, the number of students did not.

What I am looking for:

What do you think?

Thanks in advance for the input.

Both concerns are related to the table schema. Your students columns don't allowed nulls, and in your current work, you're passing null id, which is not allowed. Those, the changes were not committed. To solve it, you need to pass a valid Id when creating a new student. you can do this :

and then do this :

These are the results:

There were originally 5 students. IDs 1-5. I added 2 new students. The first one received an ID of 6. But, the second one did too.These students were did save to the dbo after a save was executed.

in short, you've executed NewId() twice before any updates. So, there were 5 records, and you've added 2 new rows (on the datagrid not the database). Those two records have not been committed to the database yet, so executing the NewId() would get the max current id from the database (which is 6). No matter how many times you execute it, as long as you've not commit any new changes, it'll always return the same value. So, either commit one row each time, and get the next max id from the database, or get the max id, then do your own counting, and commit the changes once.

For instance, your current work should store students in a collection, and whenever the user clicks save changes to the database, the application will insert the new records from that collection.

this should cover adding new students, however, you'll need to cover the update and delete logic in your app.

I've checked some of your code (from the uploded source), and I noticed that you are treating all actions as INSERT. For instance, when you add new student, this is an insert action, but when you change a value of current student, this is an update action. You didn't specify anything that separates these actions.

Since you are using Entity Framework, you could use AddOrUpdate() extension which will update current records, and add new ones.

you could do this in your code :

Another thought that I saw, you are using BindingSource, it's not required in your case, you can load the db.students.ToList() directly to the datagridview datasource, and continue your work.

Another note, you modified the Entity Framework auto-generated student model class. It's okay, but keep in mind, this class will be regenarted whenever you update the Entity Framework Entities (say, you added new entities using the designer). So, I would suggest you move all modified work from the this class, to another file (you can create another partial class and move your work to it). Just try to avoid modifying on EF auto-generated classes, if you don't want to lose your work ;) ..