I have a video that displays a soccer match. Video file match.mp4 consist of some opening commercials, the actual match and the half-time end/break. As a result, the video file is always lengthier than the match itself. The properties of match.mp4 looks as follows: 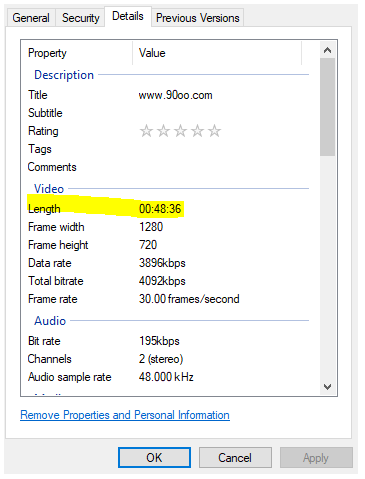 So according to my Windows computer, the file has a length of 00:48:36. I want to check this using OpenCV:

So, now I know for each frame that passes how many seconds of videoTime passes. Within the video, I am also observing the gameTime:

I try to find the gameTime using TesseractOCR and contour-detecting. Sometimes, I get the correct result, sometimes I don't get any result and sometimes I get incorrect results. Edit: these values are not giving an error or anything. They are simply not usable for my gameTime-calculation. As a result, I need a solution to estimate the gameTime for each frame, independent of usable/non-usable gameTime-data

These values are the input for my final estimation of gameTime. The goal to get an estimation of matchTime, indepedent of that particular frame gives a usable/non-usable OCR-interpretation of gameTime. Important to note is the relationship between videoTime and gameTime. Obviously, the two are different as videoTime starts with the commercials, whereas gameTime starts only when the game begins and the time on the scorebox is observed for the first time. Still, both variables are closely related as there is a simple linear relationship (with slope 1) between the video and the game time. 1 sec in videoTime is also 1 sec in gameTime.

We can write the linear relationship between the two as:

So, my question is how can we determine b as quickly and accurate as possible? Below are my considerations:

My script works, but I get the feeling that I am over-complicating things and there are easier/faster ways to determine the delay between videoTime and gameTime. Thanks in advance for your help!

Browse other questions tagged python opencv or ask your own question.

0
Recording timeback seconds of video based on compared pixels from an image
0
Pythonic data processing? Should I use an iterator?
4
Data-pulling fuctions
3
A way of keeping a constant game speed at any fps with Pygame
2
Exponential backoff generator
1
Bank account balance data structure design and code
15
Streaming H264 video from PiCamera to a JavaFX ImageView
6
OpenCV motion detection and tracking
2
Given entrance and exit logs, find the population maximum
3
Map price values to bins where bins are of a larger price range