Because I often have to deal with two Variants that may or may not be Null, we need a null-safe equality test, so I came up with IsDistinct which works but I have some issues with the code:

Can we do better?

Note that it doesn't have to be just 0 and 1; it could be text, dates, or numbers. It's more important that when either inputs are Null, it should automatically be True since Null will always be "distinct" from any non-Null values. However, when both inputs are Null, then it's always False because we are considering them "equal" in this situation.2

1) In one of iterations, I considered starting with Result = (LeftValue = RightValue) and doing additional evaluation if the Result was Null, signaling that either or both inputs were Null. But IIRC, I found that it made for more steps since I had to evaluate each inputs with IsNull to determine whether both were Null and thus not distinct.

My instinct is to go "wait, that's not right.", thinking about it and realize it IS correct. The fact that I stumble on that even more than once tells me that it's quite hard to read. Boo.

3) Thanks to @Ryan Wildry for pointing this blind spot out!

You have no idea how excited I am about this. Years after learning about the Xor operator and I finally get to use it!!

Called Logical Exclusion. It is the combination of NOT and OR Operator. If one, and only one, of the expressions evaluates to be True, the result is True.

The Xor seems like a great fit because both the parameters need to be tested for nulls and the values can not equal one another. 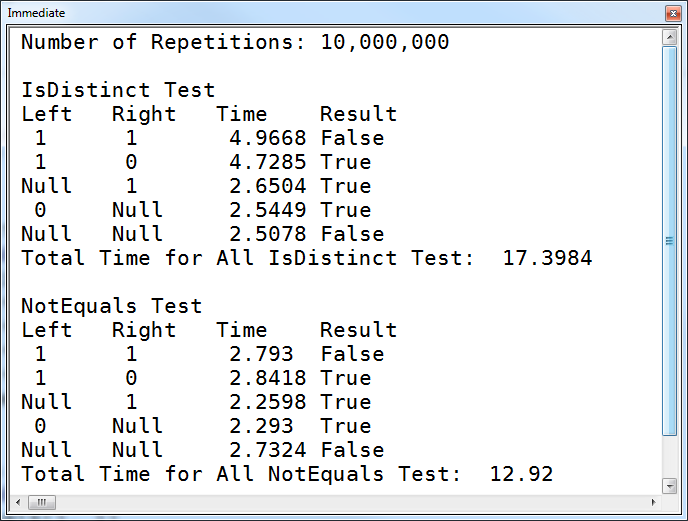 Nested ifs are something I've come to knee-jerk refactor into similar below. Writing functions that state what they're doing reduces the burden to understand. When future-Iven comes along and evaluates the logic I won't be asking myself 'What's this doing?' as I'll already know.

What about the same value but with different types? IsDistinct(1, "1") comes to mind as a test case.

Yet another approach, this time with string coercion. Knowing the type certainly helps simplify the tests, however it does come at a cost of speed. However thought I'd share for those who may be unfamiliar with the approach.

Here are the results of the tests:

Personally, when iterating possibilities, I always use SELECT CASE True instead of nested If and Else statements to just have a list of possibilities for readability purposes.

Performance might not be 100% optimal, since this can lead to slightly more comparisons, but I will gladly take that to have more readable code.

Note that because I'm iterating possibilities, I prefer not to do IsDistinct = Not (LeftValue = RightValue) but only assign literals for readability (I'll just have Case Condition Then Literal), but if you don't care, you can of course save two lines.

Developing further based on TinMan's excellent answer and other posters' contributions, I came up with this:

Both this version and TinMan's version reduces the number of evaluations to only 1 in the best case and 2 for the worst case. However, this version exploits the fact that the If conditions will treat Null result as a falsy result.1

Therefore, only equal values and Null result will proceed to the ElseIf condition, which we use the Xor to verify that they aren't both Null. If that doesn't match, then we know that they are considered the same value.

This is more terse but I think the readability hurts a bit because of the LeftValue <> RightValue potentially returning a Null result which does not make for most intuitive thinking through the logical procession. But I would say that it's more common to compare one value against another value than it is to have Null against any other value or having both Null so that is also a good optimization, I think. Need to test whether this is in fact an improvement in speed, though.

1) Aside: I found out that Select Case True does not like Null results; we get an Invalid Use of Null error with that structure. Thus, it must be a If/ElseIf which tolerates Null result. However, It's very important to remember that with a Null result, it will never ever enter any If or ElseIf branch, and therefore always fall into the Else or through.

Not the answer you're looking for? Browse other questions tagged vba null variant-type or ask your own question.