I made this to record the time I spend practicing Python. I'll eventually add in functionality to visualize the data. I'd appreciate any feedback that will help me improve.

Ways to improve and redesign:

I'll start with listing inner issues (duplication, redundant or over-complicated conditional/algorithms etc). Then I'll provide you with a new Object-Oriented approach as a more manageable, flexible and reliable.

Now, the Object-Oriented PracticeTimer class with lot of benefits like: 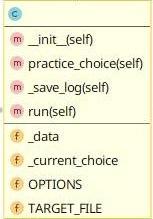 Welcome to Code Review! This is a nice first question. Here are a few comments: