I want to manage the Excel Styles in a more flexible way with bulk actions and at the same time improve my newly acquired OOP concepts. 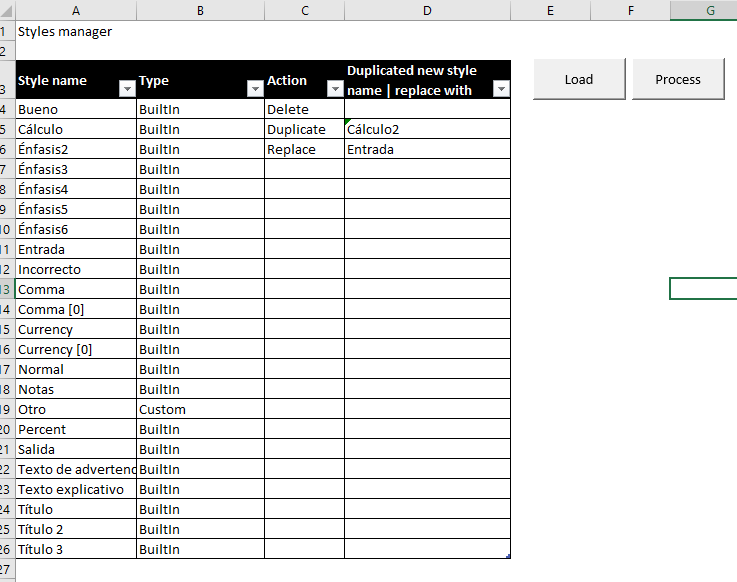 Question: How can I structure this classes to add more Actions based on Composition?

Question: Would the Factory Pattern help to make this classes easier to maintain?

Maybe this is an overkill the best way to manage styles, but and I want to do it as a proof of concept too and to learn more about OOP.

Any help reviewing the code I'd appreciate.

Link to the current file

Code is generally very clean, although I do have a number of reservations with some of the naming: c prefix for class modules, M for standard ones, is pure noise; Cell as a suffix for something that isn't a cell, is confusing. That kind of thing.

I would have named cStyles as Styles, or perhaps StyleProcessor since we don't want to hide Excel.Styles; anything that makes it sound like it's more than just a custom collection of styles would probably be a good name. MStyles is confusing - I'd just call it Macros, since all it contains is, well, macros (/entry-point procedures), and too many things are "styles" here.

The internal Private Type isn't being useful here. If there was a Styles property, it would be. But there isn't, so it's not helping with any name-clashing properties/private fields.

The cStyle class, I'd probably name it StyleConfig, or StyleInfo - plain Style would be hiding Excel.Style, and we would rather avoid doing that. If we go with StyleInfo, then infos makes a reasonably sensible name for it:

A Factory Pattern doesn't directly make code easier to maintain. In fact it could be argued that it makes things more complicated! Dependency Injection in VBA explains where and why you would want to use a factory pattern: it's a tool to help reduce coupling. In itself, a factory method is little more than an Init method that, instead of initializing the current instance, creates, initializes, and returns a new one - effectively allowing parameterized initialization of objects, like constructors do in other languages.

Having a factory method on cStyle (with a default instance / predeclared ID) would remove the need to have an Init method, so you could do this:

A factory method can't really hurt, but a factory pattern would indeed be overkill: you don't need to decouple cStyle from cStyles, the two classes are tightly coupled, but unless you're looking to decouple the Excel.Style dependency, there's little to gain here IMO.

Question: How can I structure this classes to add more Actions based on Composition?

You'd have to extract an IAction (or IStyleAction) class/interface, and implement it with some DeleteStyleAction, DuplicateStyleAction, and ReplaceStyleAction classes, and then ProcessStyles (I'd trim it to just Process) starts looking very much like a strategy pattern:

Where IStyleAction is a class/interface stub exposing a simple Run method, and styleActions could be a simple keyed collection:

Notice how every single one of these New statements increases the number of classes that are coupled with this StyleProcessor (cStyles) class? That's because the StyleProcessor is responsible for knowing what actions are available and what string value refers to what action - if we removed that responsibility, we would also remove that coupling. We can remove responsibilities from a class by injecting components instead of Newing them up. See Dependency Injection in VBA if that's something you want to explore.

Other observations, in no particular order:

Rubberduck inspections should be warning you about the implicit modifiers and unused members.

Not the answer you're looking for? Browse other questions tagged object-oriented vba excel interface polymorphism or ask your own question.