Before writing this post I looked around for a library that could solve this problem. I didn't find much so I decided to try to write this.

My problem is the following:

I have two sets of points with coordinates x1, y1, and x2, y2. The sets have different number of elements. I want to find what is the average distance between all the elements in set 1 vs all the elements in the set 2 given a certain cutoff. This mean that, if two points (of the two different sets) are further than cutoff they should not be considered.

The easiest solution is to perform \$O(n^2)\$ search and then filter the results based on the distance, but it's inefficient.

I tried to write an algorithm that divide the space of the sets in squares of size "cutoff". For each point I can associate two indexes that tell me to which box the point belong. Looking at the indexes I can generate the lists of neighbors points and calculate the distances only between points that are in confining boxes.

I wonder if there are some optimizations that can be applied to the code and I also wonder if, somewhere, there is a library that does what need. I tried to measure the speed of the simple \$O(n^2)\$ solution vs the "box solution" (\$O(n \log n)\$? I wish that). The box solution is faster but the result is not exactly the same as the \$O(n^2)\$. Is this an acceptable error in such algorithm?

I have put an image to explain my reasoning. The boxes should be squared of size cutoff (approximately). In the code we can read the variables max_box_x and max_box_y that, for the image, are respectively 4 and 3. The size of the vectors box_x1 and box_y1 are as big as one of the set. By looking at box_x1[n] and box_y1[n] we can tell to which box the particle with index n belongs. 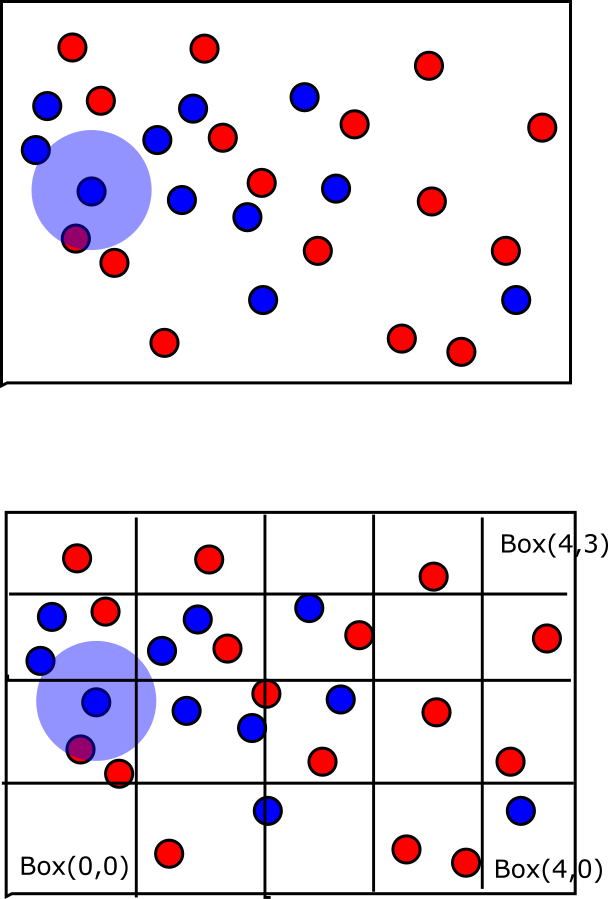 I see a number of things that may help you improve your program. I'll start with the more superficial and progress to more substantive suggestions.

Putting using namespace std at the top of every program is a bad habit that you'd do well to avoid. Know when to use it and when not to (as when writing include headers). In this particular case, I happen to think it's not terrible but it also doesn't help much.

Make sure you have all required #includes

The code uses sqrt but doesn't #include <cmath>. Also, remember that sqrt is in the std namespace, so the fully qualified name is std::sqrt. Additionally, rand is used but no <cstdlib>

Be careful with signed and unsigned

In the current code, the loop integers i and j and k are signed int values, but they're being compared with unsigned quantities x1.size() and x2.size(). Better would be to declare them all as unsigned or size_t.

The passed vectors should not be altered (and are not altered) by the processing functions. Indicate that fact (and maybe even get a small speed boost) by specifying const std::vector& as the function arguments.

Use "range for" and simplify your code

If you're using a C++11 compliant compiler, the use of "range for" can simplify your code. For example, the code currently contains this:

It could be this:

Better would be to eliminate it completely, but we'll get to that later.

The difference between std::endl and '\n' is that '\n' just emits a newline character, while std::endl actually flushes the stream. This can be time-consuming in a program with a lot of I/O and is rarely actually needed. It's best to only use std::endl when you have some good reason to flush the stream and it's not very often needed for simple programs such as this one. Avoiding the habit of using std::endl when '\n' will do will pay dividends in the future as you write more complex programs with more I/O and where performance needs to be maximized.

Right now, the code attempts to calculate the comprehensive list of distances and puts them into a large vector. On my machine, a double is 8 bytes. With 50000 and 25000 points in the two sets, this means the resulting distance vector is 50000 * 25000 * 8 = 10,000,000,000 bytes or 9.3 GiB. That's a huge amount of data, which the program then mostly discards and then reduces to a single number. (On my machine, that number is always -nan which suggests another problem, but more on that later.)

The description talks about points, but the program actually uses vectors of coordinates instead. I'd recommend creating a templated Point2D object like this:

Right now, the program is using the old C-style rand which is not a very good random number generator. The intent is apparently to create numbers in the range [0, RAND_MAX] where RAND_MAX is implementation defined. On my machine, RAND_MAX = 2147483647 but on yours I suspect it must be 32768. Otherwise you would also be getting -nan for the result or you'd have chosen a different cutoff value. So rather than relying on implementation defined values and a poor random number generator, if you are using a compiler that supports at least C++11, consider using a better random number generator. In particular, instead of rand, you might want to look at std::uniform_real_distribution and friends in the <random> header. Here's one way to do it:

The distance between every pair of points is calculated which means millions of calls to std::sqrt, but this is not really needed since it would be sufficient to calculate the squared distance instead and then compare with the squared cutoff value. We can go a bit further and test the square of each coordinate pair. That is, if \$(\Delta x)^2 \ge t^2\$, or \$(\Delta y)^2 \ge t^2\$, then there's no point in doing further calculations.

When I first ran the program, it takes 30.9 seconds just for the all_dist call and a total of 55.1 seconds to finally print the answer. After applying all of the suggestions above the program runs in 0.95 seconds. Here's the revised code:

To improve performance: the box idea is sufficient but implementation leaves a lot to be desired.

I tried to correct my question but @Mast made me notice that this is against the rules, sorry for my mistake.

In the section of the code that uses the boxes there is a for loop to generate the lists points_x1c and points_y1c. In that section there is a wrong "if" statement.

The correct code should be the following:

This is because, for the lists points_x1c and points_y1c (logically the points belonging to a specific type) you need to take only the values for the box "i,j". Obviously all the other suggestions given in the other answers still remains, the code can be better written and standardized by using these guidelines.

Not the answer you're looking for? Browse other questions tagged c++ performance or ask your own question.