Getting Windows User Info From The Active Directory

I took some boilerplate code that I have been using for determining an active windows user's info to either send emails with their details, or to pass to a error logging class, and encapsulated it in its own class.

What I would like to know about my implementation of this is: Are there more efficient ways of doing this over using ADO to query the directory, and should ActiveWindowsSession be made accessible as a Predclared Class?

The reason I ask about making it Predclared is, the active user is static as is their info, so I would think that a static implementation would be more suitable, but I am not sure. 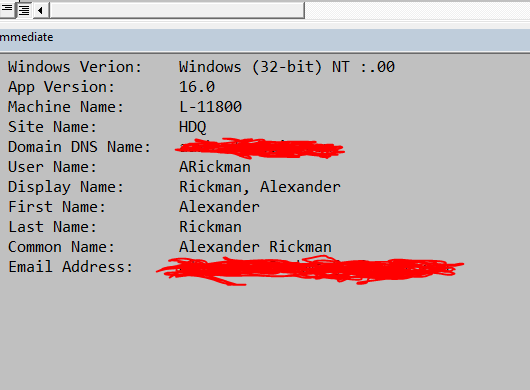 Watch for inconsistencies in indentation:

Rubberduck can fix that for you (across the entire project) with a single click.

Consistent indentation is normally understood as "executable statements within a code block are all lined up". I don't see code blocks here, and yet I'm looking at 3 levels of indentation:

So is having a block of declarations at the top of a procedure scope, and/or having multiple declarations in a single instruction:

Of particular note, the line-continuated UserAttributes makes me wonder why that one had to be on its own line (while still being part of the previous Dim statement): I shouldn't have to ask myself these questions when reading code. Also disemvoweling (removing random vowels) should not be needed.

I'm not a zealot, so to me Dim db As Object, Dim cmd As Object, and Dim rs As Object would be fine (as long as the declarations are right next to where they're set, so there's more context to it than just "well it's an object"), but Rcrdset is extremely typo-prone (kudos for Option Explicit to pick that up!).

Contrast to how seamless reading becomes, if declarations are right where they're relevant:

I know this is harder to do in a case-insensitive language, but using PascalCase for some local variables, and camelCase for others, is also inconsistent and distracting, readability-wise.

A note about this:

It's not wrong, but it's not ideal either. Consider extracting the OERN into its own reduced scope:

Empty is a special type in VBA, that works with Variant: vbEmpty would be the constant for it, but then if you assign vbEmpty to a String value, you're implicitly converting Variant/Empty to String, and so the value that ends up being assigned is "" - note that the implicit conversion is making an implicit allocation; the value of StrPtr(Empty) will be different for every single call - meanwhile the value of StrPtr(vbNullString) is 0, i.e. using = vbNullString instead of = Empty would remove the implicit conversions and the intermediate memory allocations.

I'm not sure what to think of CleanUpADODBObjects: on one hand I can appreciate taking that concern out of the calling procedure, on the other I can't help but wave a red flag when an object is being destroyed in another scope than the scope it was created in. This could be because GetUserAttributes is responsible for too many things. Also, an error in that scope can result in an infinite loop:

Not the answer you're looking for? Browse other questions tagged vba windows active-directory adodb or ask your own question.