Given a string, assuming the string is numbers only, rearrange the string to that it is the greatest possible number.

Below is my solution to the problem above. I'd like feedback mainly on the algorithm, as I wrote this up very quickly. I used comprehension syntax to find the largest num, which I'm trying to use more. Any other feedback is appreciated as well.

This is an improvement on the answer by @coderodde. Just like they said, you can do this in \$\mathcal{O}(n)\$ time by counting how often each digit appears and then using a fixed output format. However, I would use collections.Counter from the standard library and string multiplication to achieve this goal:

Compared to sorting, as presented in the answer by @bullseye, and the original answer, this compares OK. It has a slight overhead for small strings due to the Counter object, but in the end it is faster than hardcoding character values and on the same level as sorting, but not better. 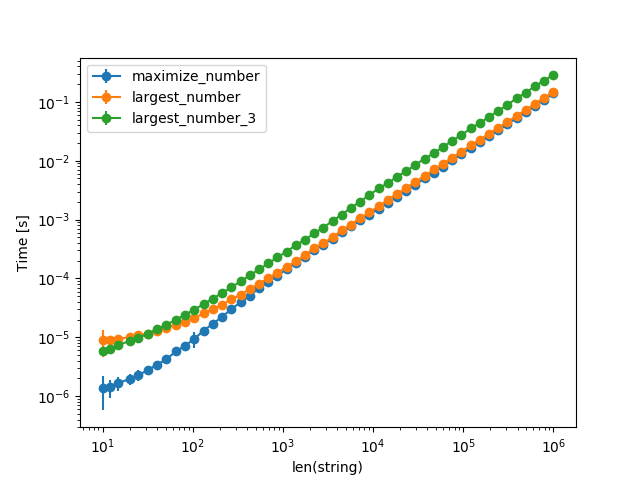 However, all three are vastly better than your \$\mathcal{O}(n^2)\$ algorithm (note the vastly different x limits): 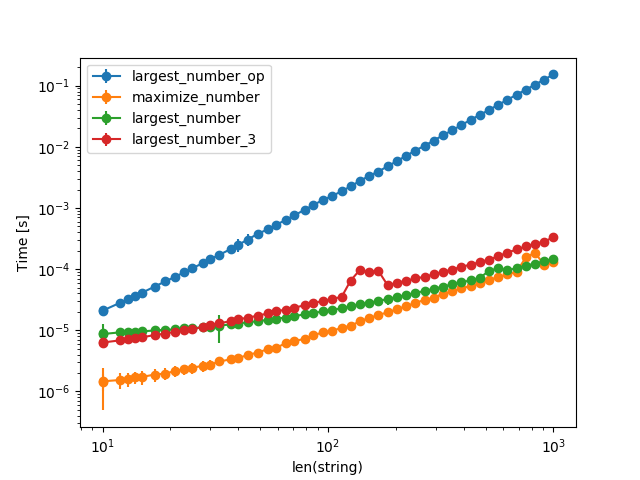 As soon as you have three or more testcases, it might make sense to not repeat the testing code. Just put the input and expected output into a data structure (a list of tuples would do here), and iterate over it:

Cannot comment on Python, but what comes to to the actual algorithm, you can do it in linear time \$\Theta(n)\$:

The above is just a counting sort since there is only 10 digits to distinguish.

Not the answer you're looking for? Browse other questions tagged python algorithm python-3.x or ask your own question.