There's a puzzle game called CrossCells (not affiliated; there's also multiple other ones with the same kind of idea, but slightly different layout and rule set) that I've been playing on and off. After getting a bit frustrated with one puzzle (they're getting larger and larger and I'm not very methodical with solving them anymore) I thought of what environment I'd use to solve them automatically (brute force not being a great idea).

This is also kind of spoiler-ish for puzzle 25, though I'm not printing the full solution, you'd have to run the code to see it.

I set up a quick hack in Prolog (SWI Prolog using one of the constraint solving modules; apt-get install swi-prolog should do the trick) and wanted to get some feedback on the solution, especially regarding

For the specifics of the code also

Edit: Since there was no answer yet I trimmed it down a bit myself, the noise is manageable now, focus would be more on how the equations could be simplified even more.

Okay so the rules of the game for this particular puzzle: 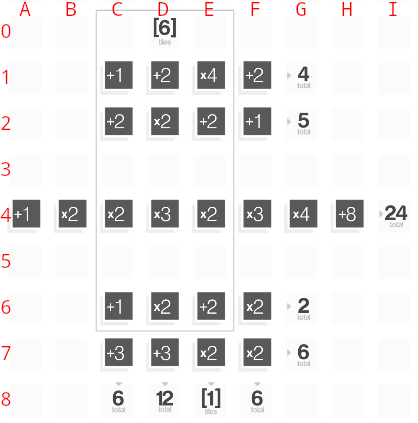 (Red was edited on top just in case.)

(Hope I didn't forget to explain anything, showing this interactively would be a little bit easier. Here's one YouTube link; of course there are others too and it might disappear.)

So the solution below

While puzzle25 computes the solution, solve (for the lack of a better name), prints the solution for a given puzzle goal (so solve(puzzle25). will solve it and show the solution), that's already preparing for more puzzles to come.

I'm fairly certain this is correct, because the output works when put into the game and there's only a single solution (which is what I'd expect from how the game is set up, multiple solutions would be more complicated for the player).

I haven't looked at any Prolog code in at least a decade. So, I really can't give any useful feedback on your code. However, the question piqued my interest, and you did say you'd be more happy with ... Python......

So I rolled my own solver in Python. It's rough and under-tested, has very little error checking, and could use some refactoring. But here it is:

Enum for the state of each square

Class for the squares

Enum for status of a constraint

Class for the constraints

Class for the puzzle

A puzzle is defined graphically by a list of strings as shown in the example below.

A square is an operator followed by an integer, and an optional group id (a letter). For example, '+12' or '*3f'. All squares and column constraints must line up under the top square in the column (they must overlap).

Puzzle.solver() returns a list of 0/1 that corresponds to the squares in left-to-right, top-to-bottom order. A '1' means the square is ON and a '0' means it's OFF.

Here's your example coded for this solver:

If you pass pretty=True to the Puzzle.solver(), it also prints out a picture of the solution.

Not the answer you're looking for? Browse other questions tagged algorithm game prolog or ask your own question.