This is a snake game I made,

Note: at this point, I would like to hear any thoughts/ reviews about it. 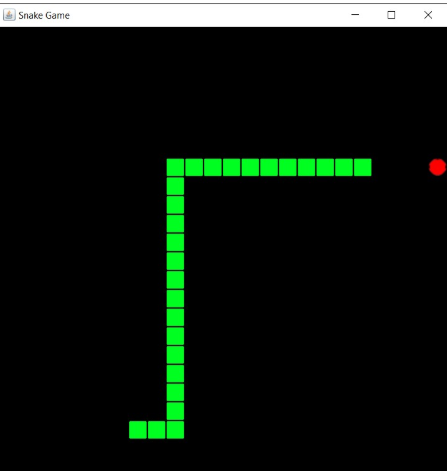 Coor has the comment coordinates ... yeah, that's exactly what the name should be then. But actually, Point seems easier and doesn't have to be abbreviated, or perhaps be more general and say Vector, or Vec2, that seems fairly common for games (despite it being an abbreviation). Not using the AWT class makes sense to me too.

The hashCode method is okay, though it could probably be a bit more random in its output (not that it matters for such small numbers of it.

The equals method could be more safe and also consider passing in arbitrary objects (or null) for comparison. Violating this is probably okay for this limited scope, but in general that shouldn't be skipped.

Also the return statement can be simplified.

The Food class uses these abbreviated names, img, rnd, etc. I'd suggest writing them out and giving them some more descriptive names in general.

The loop in generateLocation seems a bit bogus to me, why skip a random number of random numbers before picking one? If you have problems getting repeated numbers each run of the program you should perhaps initialise it from a truly random source.

Snake has velX and velY - that's exactly where a Vector would come in handy again. After all it's exactly that, a 2-tuple exactly like what Coor is.

checkDeath could use a for (x : body) ... for the death check, plus, once dead = true was set, a break would also be good.

Okay, so generally, I'd suggest not carrying around a set of empty spaces. Keeping the taken coordinates for the snake and for the food is fine. Using those you can immediately see which coordinates are empty ... all the ones that aren't taken. Given the few food items and the length of the snake the list of coordinates that's easy enough to check against.

Apart from that MyKeyAdapter (well that should be MyKeyAdaptor) is a bit weird how it's just inline there like that. And that goes for the other classes too, it's all mixing the representation via Swing with the game state and that's, at least for bigger games/projects, not advisable. Then again, it's snake. Just consider how you'd handle extending this code to encompass more features, like different kinds of objects, or how e.g. customisable key bindings would work.

So, it'd perhaps make sense to have a Renderable interface for the render method, then keep a list of objects to render in a more generic fashion, or even combine it with the tick method (perhaps with a default implementation on the interface) to update all game objects.

Not the answer you're looking for? Browse other questions tagged java object-oriented game snake-game or ask your own question.