Find intersection of rectangle with itself rotated

Given \$w, h, \alpha\$ for a rectangle centered at origin with width \$w\$, height \$h\$ and itself rotated by \$\alpha\$ around origin clockwise, I wrote a code to find the intersection area. 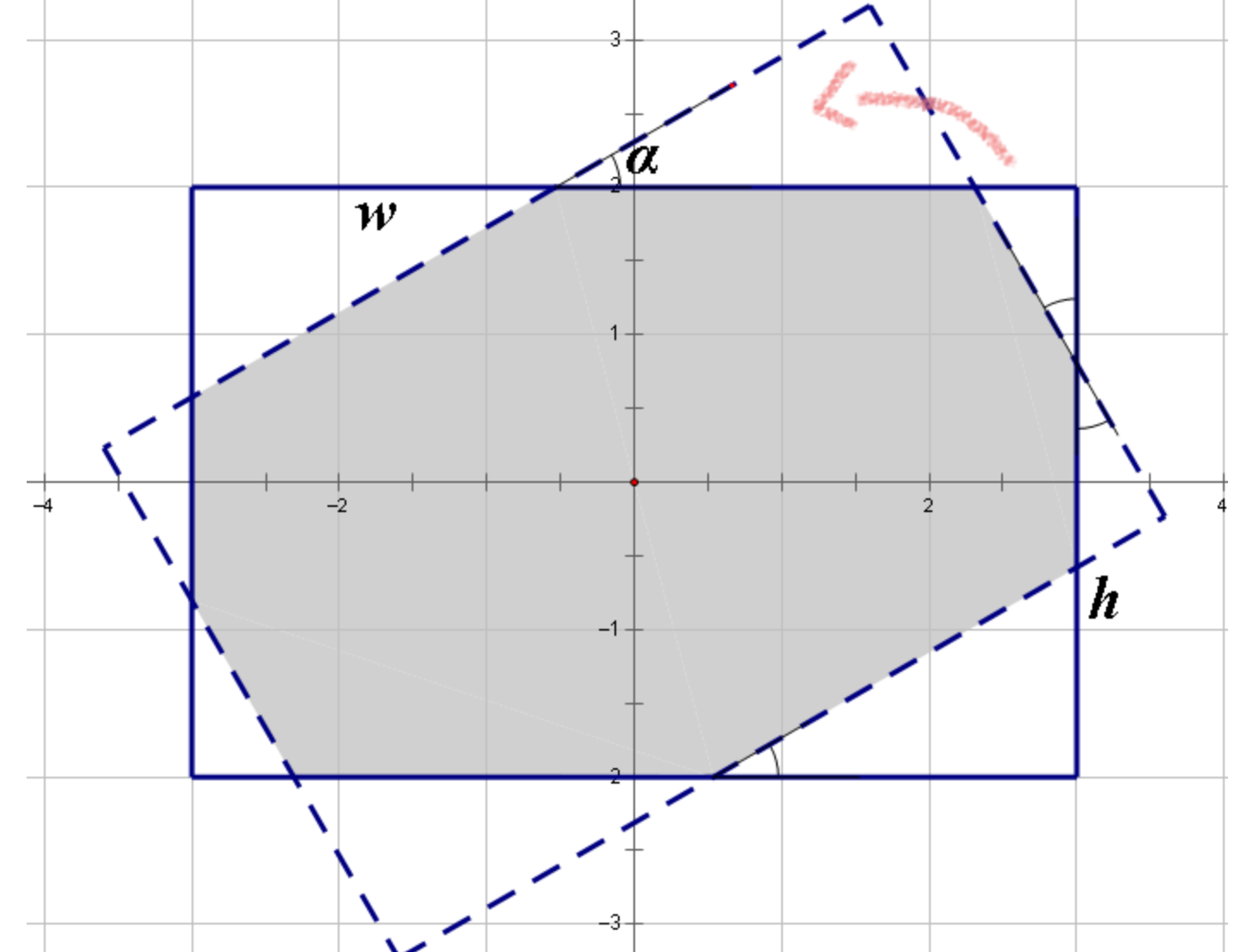 Not a full rewrite, but some pointers:

Typically, a main function's do-block shouldn't be doing a whole lot of work. Additionally, do-blocks should try to avoid having lots of let statements, and instead "outsource" that work to helper functions. A function with type Double -> Double -> Double -> [((Double, Double), (Double, Double))] could replace most of the do block (the arguments would be w, h, and a).

Every style guide I've seen recommends putting type signatures on every top-level function. Just reading the code to try and figure out what the above mentioned type should be can be surprisingly difficult. Unfortunately, as the author of a program, it's really easy to forget that you know the types because the ideas for the program were your own.

Primes in function names are typically reserved for one of two things. It could mean a strict variant, such as foldl'. "Strict" in this case means that the function evaluates its argument, as opposed to Haskell's default of waiting to evaluate things as long as possible. The other option is that it's a minor variation on the function of the same name (many haskellers would say to avoid doing even this, and to reserve primes on function names for strict varaints alone). getints' is not a minor variation on getints, it is a helper function. A more appropriate name might be getintsHelper. On the other hand swap' is a minor variation on swap, and barring a better name like swapBoth, swap' is a reasonable name for that function.

Your function uniq looks like Data.List.nub. nub is a strange name and uniq honestly makes more sense, but it's better to use library functions that readers are familiar with. It's also fine to define synonyms, like uniq = nub, this way readers can see that in the source. Recognizing that uniq is a complete re-implementation is a bit harder. If you think a function you need is simple or common, check the standard library! Haskell's is quite extensive.

With top-level types added and no other changes, this would be a very strong starting point. I'd label that as good work!

Not the answer you're looking for? Browse other questions tagged haskell computational-geometry coordinate-system or ask your own question.

5
Find the center of n squares which together build a rectangle
12
Checking if a list of coordinates defines a closed, exact rectangle
4
Ray→plane and ray→quad intersection
5
Calculating positions along the edges of a rectangle
4
Achieving a rotated Vector magnitude
4
Find an intersection point of 2 line segments
18
Intersection over Union for rotated rectangles
3
Given a list of coordinates, find the rectangle with minimal area
4
Find 4 points which form a square with the biggest area