I have tried to come-up with new different and simple method I am calling it a Single Loop String Triplets (SLST) and thus avoid the use of excessive arithmetic number operations, switches, array manipulations, reversing or splitting strings/arrays, or function recursion.

The method is not limited to JavaScript and can be used in other programming languages as the structure and flow is simple to code.

The principle applied here is to follow the human reading logic of pronouncing and writing the number (in US English) from Left to Right using the standard US English (i.e. without an “and” after the hundred parts).

The function is made to work for whole numbers (integers). But may be called twice for whole and fractional parts after a number split at the decimal point.

Also currency and sub-currency words could be added easily if a whole/fractional split is made.

It is not intended for the function to do everything or check everything as this could be left to a another higher function that will call this function, therefore the following are not accounted for simplicity:

- No checks for negative numbers.

- No checks for non-number (NaN) strings/data.

- No checks or conversion for exponential notations.

However, large numbers can be passed as a String if necessary.

The “Scale” Array may be increased by adding additional scales above “Decillion”.

It is simple to add a Comma "," after each scale words (except last) as some would prefer that.

Here how it works with an example:

1. Stringfy and convert to shortest triplets padded with zero:

The stringfied Number in Triplets is now (2 zeros added to the LH):

In other words the number is now:

In our example, no triplets exist for scales above Billions, so no Trillions or above num scales.

3. Loop starting from the Most Significant Triplet (MST) (i.e. like you read the number) and:

(a) Convert each Triplet number to words (1 to 999) and add the scale name after it.

(c) Join the new Triplet words to the end of the previous one.

Line 7 of the code ensures a hyphen is inserted for numbers between 21 to 99 in accordance with English numerals writing (i.e. Twenty-One, Fifty-Seven, etc.). You could delete that if it does not apply to you together with the associated variable declaration.

Graphical Example of the above: 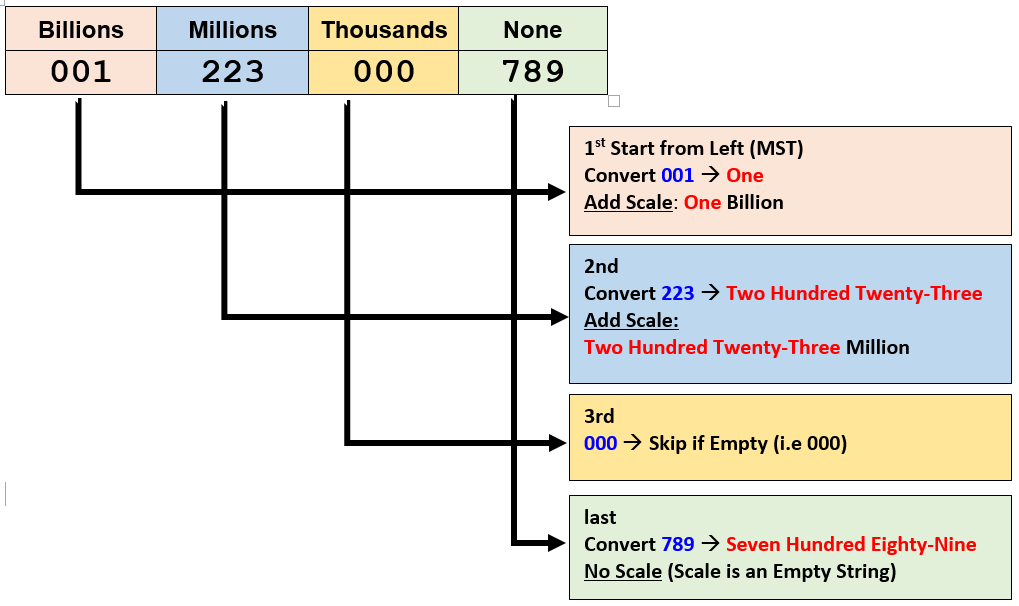 I have found this to be the simplest method to understand and code.

I have also coded the same function in VBA.

I would like the code to be reviewed for any bugs, optimization, or improvements. I am sure there is room for improvements and corrections.

Thanks in advance to all, your valuable inputs and feedback appreciated.

Your code is quite short, which is good. On the other hand, it is equally unreadable as short, which makes it worse.

It's hard to see what all these variables are used for. Regarding the names, you should not omit vowels. Say Triplet instead of Trplt, to clearly tell the reader that the code is not about Trumpletters.

Instead of this line you should rather just insert an empty line into the code. This makes it much more obvious that there is a pause here, and a new section starts.

The ?: operator is meant to be used for simple expressions, not as a way to structure code. Currently you mention Sep= twice, which can be rewritten like this:

This change makes the code look much lighter. The main action (assigning some value to sep) is clearly presented at the very left. The variable names do not use abbreviations, the !== operator makes the comparison predictable and the single quotes make the strings look lighter than the double quotes from before.

You could have omitted the comment Get Hundreds digit if you had renamed N1 to hundreds or hundredsDigit.

This line is very long and complicated. Can you read it aloud and remember what it does? I cannot, therefore I would write it like this:

Sure, it's a bit longer but the if-then-else structure is clearly visible, which allows a reader to quickly understand what is happening here. The ?: that is deeply hidden in the middle of the line is not that clear.

When you explain to a human how to spell out the numbers, you would probably not need to mention that extraneous whitespace needs to be trimmed. Yet your code does exactly that. This is another sign that your code is not as human-like as it could be.

Since you didn't provide any unit tests, it is hard to see whether this code works as intended. It is also hard to read and hard to step through using a debugger, because of the many badly named variables.

To improve the code, I started with your code and finally arrived at the following code:

I would use a Closure to avoid excessive memory usage and allow for reusability of the method. Try also to adhere to styling and naming conventions. I don't mind variable names a, i, j, ... Make sure you document them well. Replace var with respectively let and const.

The following code with revised variable names and less coding

While maintaining the same concept of using the Single Loop String Triples (SLTS) method, the code has been updated and improved as follows:

The code using the SLTS method has been benchmarked against other methods and is found to be of better performance; in some cases is almost over twice faster.

Not the answer you're looking for? Browse other questions tagged javascript number-systems numbers-to-words or ask your own question.

3
Written numbers to numerical representation
8
Dividing a number half into words and half number
12
Changing Number to Words in JavaScript
15
One, two, three, … Un, deux, trois, …, maxBound::Int
4
Measuring the length of binary numbers in English words in C
4
Simple Number to Words using a Single Loop String Triplets in VBA
3
Indian Numbering System - converting into the Official and Common-Use Numbering Systems Words/Strings