I wrote a version of sieve of eratosthenes:

It seems to perform fast enough for my purposes. I'd like to get some review about it's performance since I'm a novice. Also, I'd like someone with enough memory (if possible) to run the below two tests:

Four* letters to rule them all

The Sieve of Eratosthenes is an algorithm which heavily relies on loops. Unfortunately, Python's convenient scripty nature comes at a cost: it's not terribly fast when it comes to loops, so it's best to avoid them.

This simple decorator and no further code changes brought the time for n = 100 000 000 from 36s down to about 3s on my machine. The larger test case did not work out to well with my 16GB RAM and some other things to do apart from Code Review.

You can also have a look at this generator based implementation of the algorithm presented on Stack Overflow. The implementation can benefit from just-in-time compilation as well. A quick test using the SO approach and @jit for the previous n brought the execution time down to just below 2s on the same machine as before.

What numba cannot fix for you

There are a few aspects with respect to style and idiomatic language features (often called pythonic code) that you have to/can improve yourself.

might be working and syntactically valid, I find it very, very uncommon and would not recommend it. A more "pythonic" way to express this would be

This makes use of Python 3's type hinting and the recommended way to write function documentation using docstrings.

The way you construct your candidate list using numbers = [x for x in range(0, n+1)] is also a little bit complicated, and may be simplified to numbers = list(range(n+1)). 0 is the implicit starting value for range(...) and since range(...) already returns a generator you can simply pass it to a list constructor and work with it.

You should also have a look at the official Style Guide for Python Code (PEP8) and follow it's recommendations regarding whitespace within expressions and statements.

If you intend to supply your testing code together with your function in a single script, wrap it in the well known if __name__ == "__main__": construct to ensure it is only run if your code is used as a script.

* Well not strictly speaking, but it's close.

At the end of their answer, @AJNeufeld has the right idea to improve the algorithm even further (in pure Python). You want to minimize the amount of numbers you have to mark off as being composite for every new prime you find. In order to do this, you can actually start at current_prime * current_prime, since you should already have marked up all smaller multiples of current_prime when you found all primes smaller than current_prime.

In addition I would use a slightly different data structure. Instead of having a list of all numbers up to limit, just have a list of True/False, indicating whether or not the number is (potentially) prime. You can immediately mark off 0 and 1 as not prime (by the usual definition) and then just need to proceed to the next True in the array, the index of which is the next prime number. Then mark off all multiples off that prime number as composite (False).

This function is a generator. You can just iterate over it to get one prime number at a time, or consume the whole generator using list(prime_sieve(1000)).

Using a for loop to mark off composites can be improved further using slicing:

This uses the fact that the range object in Python 3 is a generator-like object which has a quick calculation of len implemented.

As for timings, here are a few. In the end, compiling it with numba is usually going to win, but you can get a factor of two just by making the algorithm a bit easier. And this factor of two carries through when jitting this answer as well. 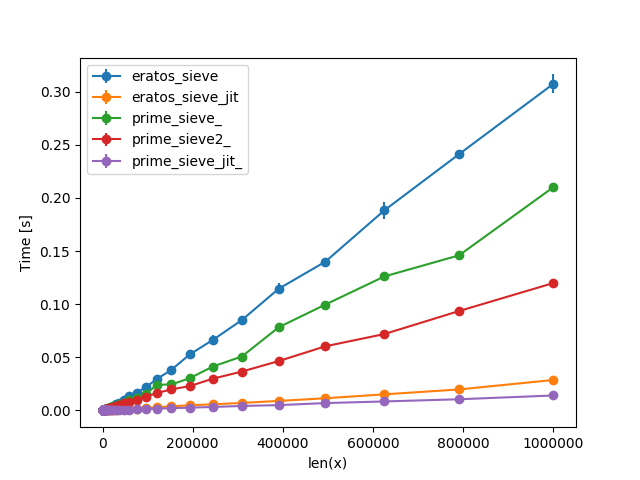 AlexV has made some great points. I’ll try not to duplicate them.

This seems like odd code. numbers[x] == x is true, or numbers[x] == -1 is true. You should save the indirect lookup in the numbers array, and just loop:

You take great pains to explain in a comment that len(numbers) == n+1, but then you evaluate len(numbers)-1 anyway. It is just n. So you could simply write:

Now, i starts at current_prime, and goes up to the last multiplier that results in current_prime * i still being within the bounds of the numbers list. You could simply use the range() method to count by multiples of current_prime, and let it figure out when it has gone beyond the limit for you:

Your summary loop at the end is not Pythonic:

Instead of looping over the indices of the numbers list, you simply want to loop over the values of the list.

to trim off the first value of the list.

There are a number of things which you can do to further improve the performance. The easiest would be to special case “2” as prime, and then start at 3 and count by 2’s to skip over the even numbers. When clearing out multiples of prime_number, you would again skip the even multiples by incrementing the index by 2*prime_number, approximately doubling the speed of the algorithm by cutting the work in half.

Python is a great scripting language, but that ease of use comes with a cost. Everything is an object, and the Python environment manages the object allocation for you. This results in a lot of memory usage per object. With a few thousand objects, that isn't a problem. With hundreds of millions, that overhead starts to have a serious impact.

Positive integers between 1 and 1.07 billion take up 28 bytes each. If you have a list of the first billion integers, you're going to need 28 GB of memory for those integers. Plus ...

Instead of storing integer objects in a list, we can be way more efficient if we ask Python to store integers directly in an array.

a is an array of 4-byte unsigned integers. And it only requires a mere 4 GB of memory.

As pointed out by @Graipher, you don't need to store the integers in the array for the sieve; you can simply store boolean flags. The array.array object is designed for numbers, not booleans, but we can store True and False as a 1 and a 0, in which case we only need 1 byte integers, so we can reduce the memory requirements down to 1 GB.

Instead of filling in the memory with a billion 0's, I've initialized all the odd elements to 1, for possibly prime, and 0 for the even elements, for not possibly prime. We just need a minor correction, so a[1] is flagged as not prime, and a[2] is prime.

array.array is overly complex for this issue; it has to do calculation based on the size of the elements. Since we are storing individual flags in bytes, a bytearray should be faster:

Now you can proceed with your sieve, testing only odd numbers, and marking as not prime only the odd multiples of a prime number, start with its square, up to the end of the sieve:

How many primes do you have? Just add up all of the 1 flags!

Where are you going to store these? How about in an array object, for efficiency? Since the prime number will go up to 1 billion, we'll again need 4-byte integer storage.

If our machine speeds are comparable, this sample point would fall between the eratos_sieve_jit (orange) and prime_sieve2_ (red) in @Graipher's plot.

Not the answer you're looking for? Browse other questions tagged python performance beginner algorithm sieve-of-eratosthenes or ask your own question.