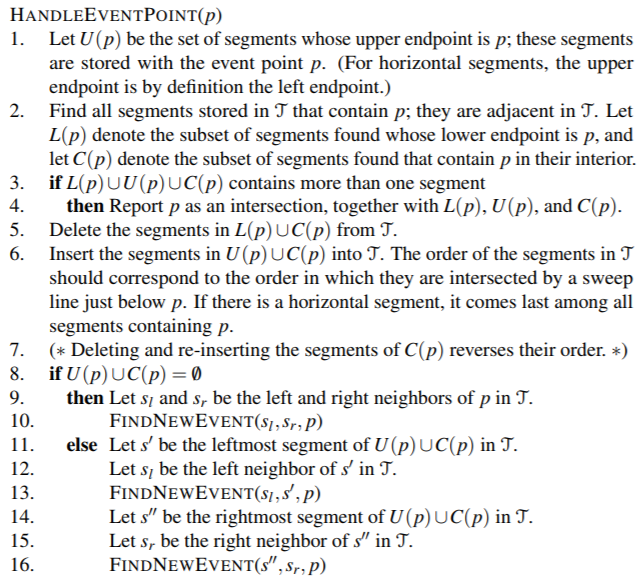 The code is below: (All the code actually is here: https://github.com/lukkio88/ComputationalGeometry/tree/master/Point, but the relevant bits for the algorithm are the .h and .cpp below)

The algorithm is quite complicated, this is why I'm asking for a review.

I'm not an expert in c++, so I will focus mostly on the correctness of your implementation w.r.t. the algorithm as described in the book.

Often, the main challenge in implementing geometric algorithms is the fact we cannot work with the real numbers and therefore implementing geometric primitives (is this point to the left of a line, find the intersection of two lines) is tricky. There are multiple ways to implement them, and combinations of them can be used as well:

In general, numerical robustness is a hard problem to deal with efficiently. (These slides on some considerations of these issues within the CGAL library are nice to give an idea of the complexity involved)

You should decide on which approach to take depending on the purpose of your implementation. If your main purpose is to learn by yourselves, you might get away with using double (properly!) in the instances you test it on. If you are getting issues with the precision, consider using fraction arithmetic. If you want to use this algorithm in production, don't. Instead, use the naive O(n^2) line segment algorithm or use CGAL.

For the following, I will just assume that this implementation is supposed to be only educational.

This is not in the class you posted, but it is important to do this correctly, so I will mention this anyway. I will first make some remarks on your current approach.

You cannot rely on equality holding when the numbers are equal. Instead, you should consider everthing that is less than a small value as equal to zero (as you have done correctly in ComparePts):

But be aware that this will give an incorrect answer if there are true values in between 0 and eps or if the error in the calculation of twiceArea(c, d, a)*twiceArea(c, d, b) is larger than eps.

Also, twiceArea is not a good name. Areas should be positive, and it also isn't clear of what you are computing the area. Additionally, you only need the sign of this operation. I suggest you replace twiceArea by a function orientation that returns its sign, where you should set the sign to 0 if the value is less than some small constant and otherwise return the sign properly (1 if positive, -1 if negative)

To compute whether two segments intersect, I suggest the following approach:

The advantage of this approach is that you replace the test sign(a * b) < 0 by sign(a) != sign(b) and avoid a floating point operation. It also places all the imprecision 'inside' the smallest function possible, which makes it easier to adapt it to more precise approaches or different ways of dealing with the imprecision.

As for Segment::intersect, I would instead implement a function to compute the intersection of lines extending from the segments. This means that you drop the check for checking whether the segments intersect, although you probably want to test for the case where the lines are parallel and do not intersect. One reason to do this is that you can then use this function to compute the intersection point of a segment with the sweepline, it it intersects the sweepline. So, you can replace getX with a call to the the line segment intersection function.

With these low-level implementation issues out of the way, let's look at the rest of the code.

instead. (The else is unnecessary.)

It seems you are comparing the inverse of the slope here. I would not normalize here and compute the inverse slope normally ((s.q.y-s.p.y)/(s.p.x-s.q-x)) which avoids having to determine which part is 'up', or at least not take the square root, that is not needed it makes it impossible to use fractions. (you can simply compare the squared Euclidean norm)

You are using above to switch the order of segments in the status at their intersection point. This is ok, but you have to be careful when you insert two segments with the same upper endpoint (when you put all eventpoints except the intersections in the queue). In that case, the above flag should be false. (it is not clear to me what the initial value of above is)

Set and Map use a red-black tree as the underlying data-structure, so they have the required logarithmic time for insertion, removal and lookup. So far so good.

This is incorrect, p does not have to be an upper point of all segments stored at the event point, the segments can either have this point as an intersection point or as lower point. You can check at this point to which part the points belong, but I'd recommend to store the type of point when inserting the event, as it is always known at that point. This also helps with visualizing your event queue for debugging.

I'm not sure if there are more errors here, but I suggest you implement the simple case where an event-point can only be either 1. the top of a segment 2. the bottom of a segment or 3. the intersection of a pair of segments. I would only extend this to the general case if I test that that works.

Also, it helps to make some simplifying assumptions and test your implementation under those conditions first. Assuming that the points are in general position or that no points have the same y-coordinate simplifies the problem. (but be careful that this has to be the case for the intersection points as well)

Why is there #pragma once in the implementation file? Including it twice in the same translation unit is clearly an error that should be fixed, not a normal state of affairs as a header would be.

I didn't get beyond this, as the rest seems to depend too much on the library that defines Float, Point and Segment, and there's no clue which of the many geometry libraries is used.

Not the answer you're looking for? Browse other questions tagged c++ computational-geometry or ask your own question.