Bit of a complicated one for me.

I have a database full of hundreds of thousands of records, many of which are duplicated.

Step 1 - find out earliest date for each record

I created this as a view and called it [EarliestInteraction]

Step 2 - grab all within the last year

My question is, is this a good way of doing this and accurate?

Or am I missing something that would bring back earlier duplicates...

Any thoughts on if this is accurate or achieves the brief would be great.

The following are a few suggestions on how I'd write your view.

If you don't already have a database project, create one in Visual Studio. Then check it in to source control. Microsoft Azure DevOps Services is free & private for teams of 5 or less (this is per project, so 5 developers per project). Then you'll be able to track changes you make to your stored procedures, views, tables, etc.

I would download the following tool for SSMS and Visual Studio, Poor Man's T-Sql Formatter and on GitHub. I use it when I have to edit other developer's code. It's a great way to standardize your SQL. I find it does most of the formatting for me, but I'll still make a few changes after.

Here are the settings I used: 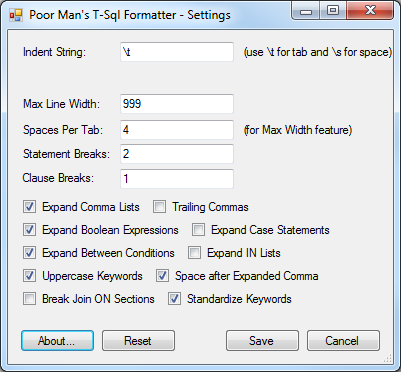 I would put the commas in front to clearly define new columns. Versus code wrapped in multiple lines. It also makes trouble-shooting code easier.

If you put 1=1 at the top of a WHERE condition, it enables you to freely change the rest of the conditions when debugging a query. The SQL query engine will end up ignoring the 1=1 so it should have no performance impact. Reference

CTE's in your SQL help with documentation. The expression name can then let other developers know why you used that expression e.g. current_suppliers or active_projects.

Always reference the schema when selecting an object e.g. [dbo].[SalesTable].

It's a good idea to check the Estimated Execution Plan. The shortcut in Microsoft SQL Server Management Studio (SSMS) is Ctrl + L. You can even run 2 queries in the same tab to compare the plans.

Without table definitions and sample records I was unable to test this, but it should give you a good start.

Your view does not filter on the most recent year.

This filter does not change that because your view has already grouped results taking into account data older than 1 year.

You don't need a view, just a CTE.