I have been reading about passwords and hashing algorithms and what not and decided to write a program.

Overview: The user should be prompted to create a password the first time the program is executed. They should enter a key and confirm it. If they have executed the program previously, then they should just enter the password to gain access.

I determine if the user has run the program by checking if key.txt exists. Is there a more preferred method?

I tried to streamline some code with the two bool functions. Any other suggestions for cleaner or more concise code?

Many thanks to Stephan Brumme for the awesome hashing algorithm code! This was very easy to implement.

So do you really need a function? It depends. If you want to let your program evolve from here, it's a good idea to keep the function, and implement a more viable test at a later point without disturbing the rest of your code. Otherwise it isn't worth the burden of finding a name for it.

Then again I'm not sure it needs a function of its own...

It might be a design choice, but it's very rare to allow for tabs, spaces and such inside a password. Is this really what you want? Is it compatible with every way to store passwords that you can think of? How would you constrain the choice of a password?

Another thing to keep in mind when doing security focused applications is reverse engineering.
Using that, a potential attacker can simply analyze your compiled program and then binary patch it to circumvent any security measures you have put in place. Of course in your case this is rather trivial because the source code is available. However even without the original source it can be possible to do so for example by looking for certain tell-tale strings.

Running your program gives some great hints about program flow via the strings Access Denied! and Access Granted! respectively. If one were to analyze your program it would be easy to find references to above strings to pinpoint the location in your code that needs to be patched.
Ultimately your program comes down to this part:

Notice how you can see part of your if statement, namely the condition test and then a jump (JNZ) as well as the message Access Denied!. if you follow the jump you will get to this part: 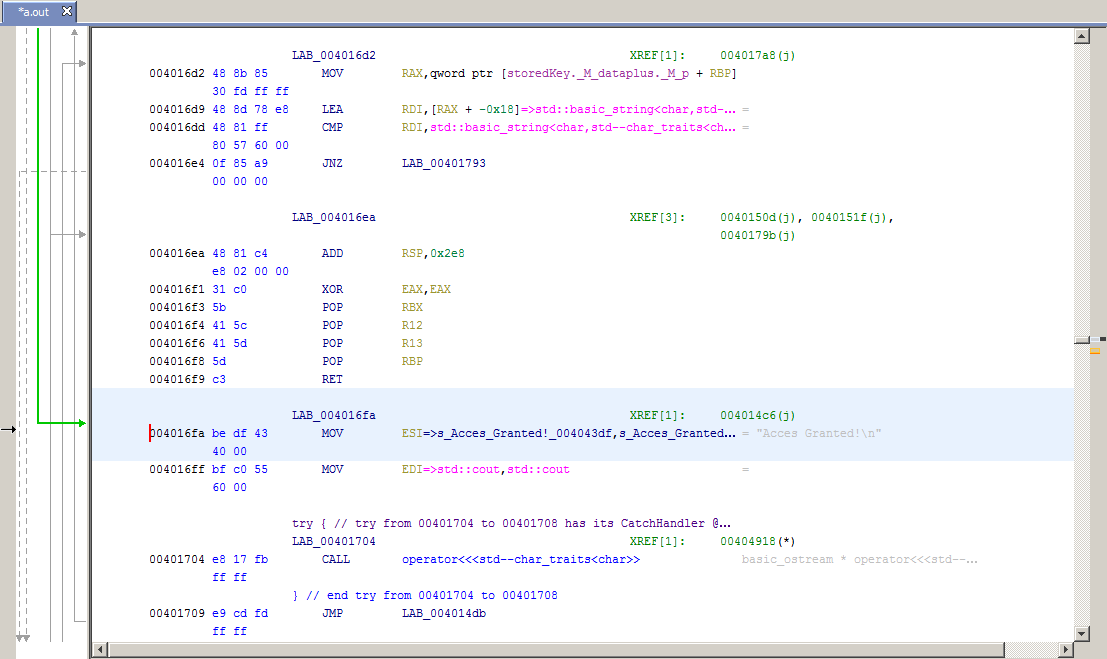 Which just happens to be the "protected" part of your program. The attacker now only has to "patch" the jump to always jump to the right location of your program regardless of user input.

In order to protect against this you can read up on obfuscating programs and making them harder to "crack".

Instead you can use

Here is a link to why we should avoid using namespace <name>; type of statements

In the function bool keyExists(); your bool variable is not necessary you can directly return the output of expression inside if condition. Same can be done in the other bool function, if you worry about readability then you may add a comment line after the return statement stating the intent behind the return value.

Also you can define both bool functions as inline.

Not the answer you're looking for? Browse other questions tagged c++ authentication or ask your own question.