Given an array of integers, return indices of the two numbers such that they add up to a specific target.

You may assume that each input would have exactly one solution, and you may not use the same element twice.

Approach 3: One-pass Hash Table
It turns out we can do it in one-pass. While we iterate and inserting elements into the table, we also look back to check if current element's complement already exists in the table. If it exists, we have found a solution and return immediately.

and mimic a python solution

Unfortunately, my solution is only faster than 81%, which I thought was a best solution.

How could continue to improve the code, and I am curious about the approaches of the top 20%.

You can further improve performance by including Alain T.'s change for small numbers.

And has a performance improvement: (the graph is volatile due to only using one input sample) 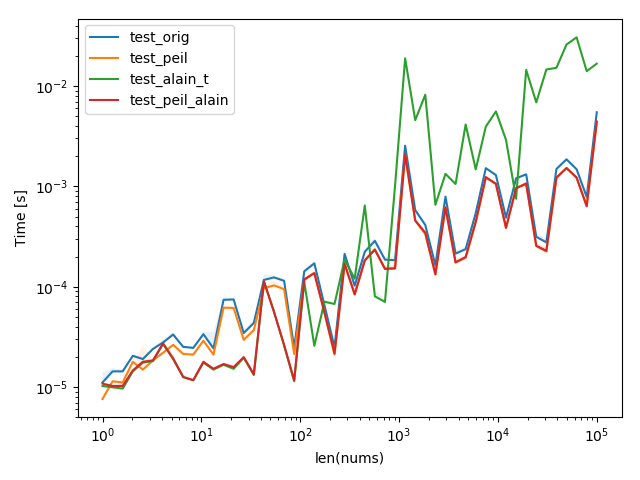 Your code looks like Java. In order to get good at Python, you'll have to give up some of the Java-isms. This code didn't need to be in a class (unless there was some external requirement you didn't show us). A function would have been fine.

Let's start with the iteration. Ned Batchelder gave a talk called Loop Like a Native that contains a lot of great advice for writing looping structures in Python. You should watch that for a lot of pro-tips on basic stuff.

So with just those three suggestions, we can change your code to:

Next is your choice of how to check if the complement has been seen before. You are calling the .get() method twice, once for the check and if successful you call it again. This is minor, since you'll only succeed one time. But calling the .get() method and then comparing it will None is more expensive than you may think. Try using the in binary operator instead. And while you're at it, just use dict[key] notation if you know the key is in the dictionary:

It's hard to predict performance improvements. But I think that "less is more", and in this case less opcodes is more fast. Here's what the dis.dis output looks like for your original code (starting after the for line):

And here's what the changed code produces:

The third column (lots of numbers) is byte offset from the start of the code, so you can see the new version takes 6 fewer bytes to run, out of 28 bytes. That's about 21% less.

Does this mean the code will run 21% faster? No. There's lots of other code in there that doesn't change. But it means it probably runs some faster -- you'll have to determine how much.

What I've seen here hits the dict twice per iteration.
If I was into this, I guess I'd try to hit the dictionary just once a number:

How about using as a key neither the current number nor its complement, but their absolute difference?
Getting the index via found = seen.setdefault(diff, value), you'd still have to check whether

(actually, the results don't always live up to how I read the doc string:
while I hope that it returns the lowest index of the summand found last, I can see it returning the highest (lower) index of the other one. Resolution left…)

The overhead of creating a dictionary makes the solution less efficient for small lists.

is about twice as fast in the best case scenarios (a small list with a match in the lower indexes) but it will lose out when there are more items in the list.

A more concise way to write the dictionary based approach (which happens to also run faster) would be this:

You can get further acceleration (for large lists) by filtering on the maximum range of eligible numbers:

Not the answer you're looking for? Browse other questions tagged python performance algorithm python-3.x or ask your own question.