I have a list of animals with their counts:

And I have a matrix of how many times they appear together: 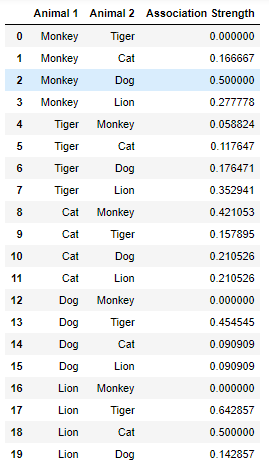 The problem is, if I have a large number (say, 1000) of animals to loop on, it takes hours to finish computing the association strength table.

So, how to do I better optimize this last code block, the creation/generation process of this association table?

P.S.: In most practical use cases, df2 is a symmetric matrix, as "X appears together with Y" generally also means the same as "Y appears together with X". So, I am ok with solutions that assume that df2 is symmetric, and cut down the running time by half. In the above example, df2 is not a symmetric matrix, which is the more general case, and applicable for situations where we want to express meanings such as "X appears after Y" and "Y appears after X", which may not be the same.

Even in the non-symmetric case you can speed this up by not having the explicit double for loop. Since your case is not even normalized (apparently an animal can appear together with more than one other animal at a time), you do need your df1 as the normalization (instead of just e.g. df2.sum(axis=1). This gives you the matrix of the associations:

(I figured out the needed transposes by trial and error until I got the same values as in your post...)

And then you can use pandas.melt to get it into your format:

Note that the order is different to your solution and this also contains the association of each animal with itself (and it is not one in this example, due to the normalization). You can just filter it out, though, if needed:

Finally, all of this only works as long as the dataframes still fit into memory, of course.

Not the answer you're looking for? Browse other questions tagged python performance python-3.x statistics pandas or ask your own question.