SplitSort — An adaptive algorithm to handle collections with few inversions

SplitSort is a sorting algorithm working in three steps:

Instead of trying to find an actual LNDS, the algorithm uses a simple heuristic to find an approximate LNDS: it reads the collection element per element and considers every element found so far to be part of the LNDS, but whenever it reads an element which is strictly smaller than the previous one, it removes both elements from the approximate LNDS.

The only thing left to do is to sort the unsorted elements and to merge the two parts of the collection in order to obtained a fully sorted collection.

As a bonus, here is a graph showing the performance of SplitSort against two other sorting algorithms when sorting collections of \$ 10^5 \$ long std::string with an increasing number of out-of-place elements: 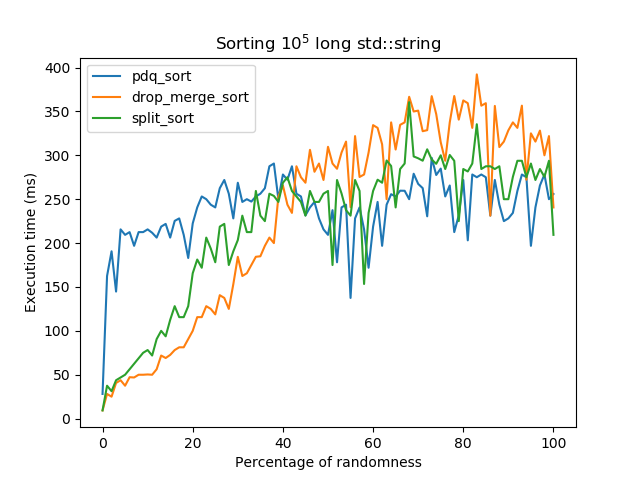 It's a bit sketchy but we can see that SplitSort performs better than pdqsort (a smart introsort derivative) when under 40% of the elements are out-of-place and has some additional overhead when more elements are out-of-place. I also included drop-merge-sort in the benchmark because it uses a technique really similar to SplitSort except that it uses a smarter LNDS approximation scheme, and also isn't an in-place algorithm contrary to SplitSort. We can see that both algorithms offer a different trade-off with drop-merge-sort being faster than SplitSort when there aren't many out-of-place elements, but having a higher overhead when there are more such elements. Interestingly enough, both algorithms have a cut-off point around 40% of out-of-place elements where they start to perform worse than an introsort-like algorithm.

That's it, now you know how to write a simple algorithm to sort collections with few out-of-place elements faster. Any suggestion about improving the code so that it's more performant or more readable is welcome :)

There is nothing wrong that I can see.

I can nitpick (so this is only to be overly nitpicky). But nothing I say here would stop me from merging this into an existing code base (assuming you had the tests to prove it worked correctly).