I made a simple password cracker using Python. But it's extremely slow. Here is my code:

I want to make it faster. Also if there is any wrong part in code, please tell me.

As has been noted in the comments, you should try to figure out what part of the code is slow. Is it the connection to the server or does your program just have to try many passwords and that takes so long?

The former can be measured by decorating connection with a decorator that records the time it took to run the function:

Note that this will slow down the overall execution time a bit (since stuff needs to be done in addition), but you do learn if the connect is the bottleneck (and you can always remove the timing again later).

To find out if it is just the number of permutations, I would add some debug prints. I would also factor out the generating of the passwords from trying them further:

When testing this you will quickly discover that there are many permutations to try and even when doing nothing with them, this takes quite some time:

I stopped at length 5, you want to go to length 8. As you can see in this plot, the time rises very quickly (note the logarithmic y-axis): 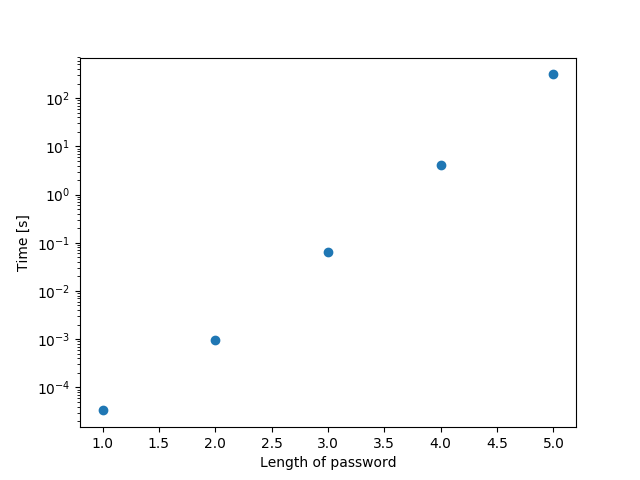 Extrapolating this to password_length = 8, it would take about 536 days just to generate all combinations of that length.

Passwords are still used today because it is very hard to guess a (random) password of sufficient length.

Not the answer you're looking for? Browse other questions tagged python python-3.x socket or ask your own question.