I have a PR implementing denoising discrete Lanczos derivatives, following this paper. The following code works well, but the design is a train wreck, and I was hoping to get some advice to improve it.

But here's what it does: Give it some noisy data, and it will compute a reasonable derivative from it, so long as the SNR > 1: 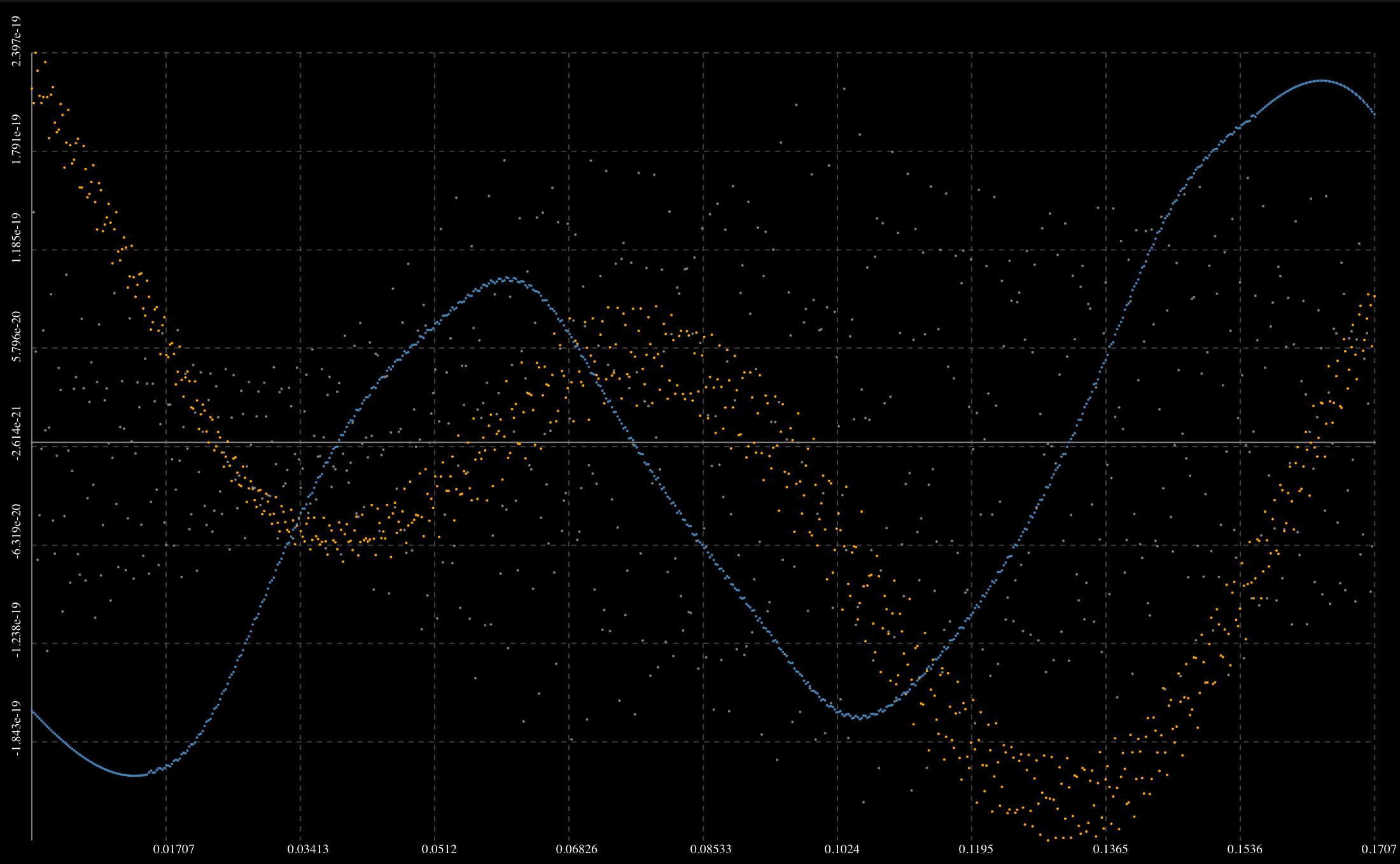 The orange time series shows the raw LIGO signal. The blue is the derivative of the LIGO signal computed with the (n,p) = (60, 4) discrete Lanczos derivative, and the gray is the standard finite difference formula, which is total garbage.

I will only post the code, but here are the tests and documentation.

That's a pretty dramatic demonstration image - there's no doubt that the function is worth having!

I make no claim to understand the mathematics, but I'll happily look over the C++ code.

I'll start with the includes, as we seem to be missing some that are required:

We have a portability problem, as we've consistently omitted the namespace of std::size_t and std::int64_t (BTW, consider std::int_fast64_t as a better alternative to the latter, unless we need exactly 64 bits).

It's usually a bad idea to have a class that is constructed into an unusable state, requiring a second "initialization" phase before it's valid. Sometimes it's unavoidable, but that's not the case here. Simply pass the initialization parameters to the constructor, and omit the initialize_recursion() member (simply create a new instance, as that's no more work than resetting all the members).

Here's an example of where we replace re-initialisation with re-construction:

The filter functions are next.

Please don't use l as a variable name; it looks too much like the digit 1!

For indexing vectors, a good practice would be to use std::vector<>::size_type rather than assuming that it's std::size_t. But don't get hung up on that.

All three filters have a common step, which should be factored out for maintainability:

We could consider a Strategy pattern here, but I suspect that would lead to bigger and less clear code.

Leaving the detail namespace, we reach the main class, discrete_lanczos_derivative.

Why !std::is_integral_v rather than the more obvious std::is_floating_point_v? Are we expecting this to work for std::complex<> values, perhaps?

Given that almost every method switches on order, I think that specializations or separate classes for first-order and second-order are likely to be clearer. We could put the common parts in a base class.

v is user-supplied, so an assert is the wrong kind of check here if it terminates the program. I think it's better to throw a std::out_of_range or similar instead.

Perhaps a signalling NaN would be more appropriate here? Although, as I understand it, this seems to be reached only if we're instantiated for an out-of-range order.

This seems to be a duplicate of operator()(RandomAccessContainer const & v, std::size_t i), with i set to size(v). So implement it by delegating:

There's not necessarily a performance penalty for this - the compiler may choose to inline it, or (better) arrange the functions so that one is a prefix of the other.

Not the answer you're looking for? Browse other questions tagged c++ c++17 numerical-methods signal-processing or ask your own question.