I wrote a simple tic tac toe game in python. (I wrote the game logic and implementation separately) (in this case, it's a command line interface, I may do a Tkinter version) Can you review the code and give me tips for the future ? 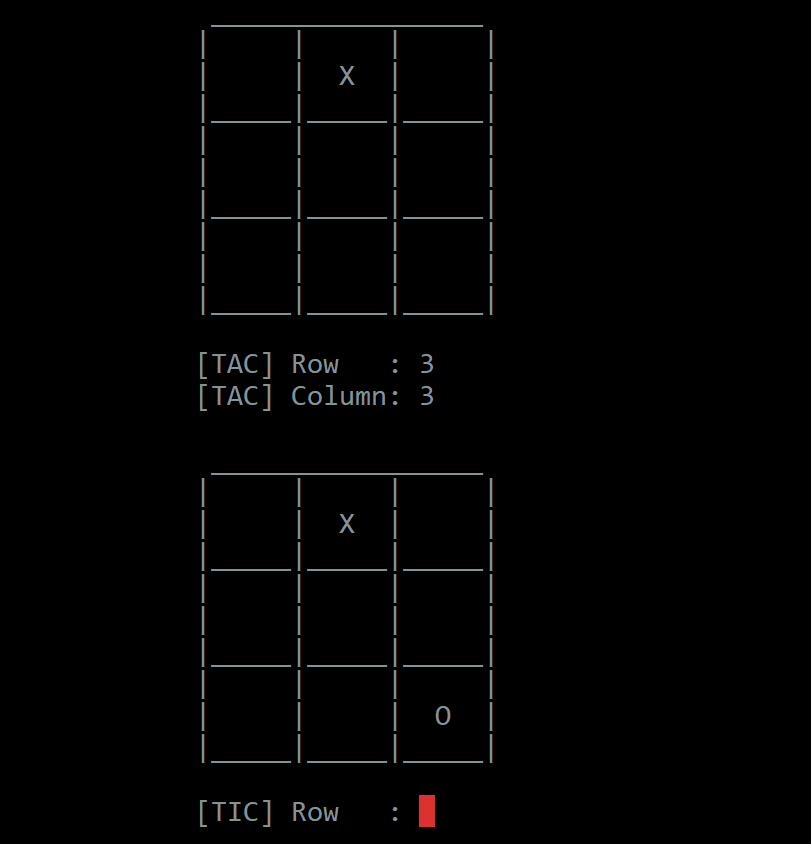 I would create a TTTBoard class with the logic to draw it as text, fill positions and check if the game is won as methods of it. Then the main program would create an instance and process input like it already does but not worry about much else.

is_valid_move(state, tup): Is the given move really valid? If the tuple (123,4.71) is given, is it a valid move, invalid move, or a crash-the-program input? It can only be valid if the tuple exists as a key in the state, so perhaps:

tic_turn(state, tup) and tac_turn(state, tup) share almost all the same code. The only difference (other than the docstring) is the value assigned to state[tup]. You could make one function, and pass in the player as an argument.

Both tic_turn and tac_turn take the current state of the board, duplicate the state dictionary, modify the copy to produce a new state, and return that new state. Why? If you are coming from a functional programming paradigm, where mutable objects are eschewed, I suppose I could forgive you. If you are planning on implementing an AI which has to search the game state many moves in the future to find the best move, I suppose I could forgive you. But with what is written so far, it would be far, far simpler to simply modify the current state; then you could return something else ... like whether the move was a winning move or not. Speaking of which ...

What is this human_input verses machine_input all about? The computer is not producing input for the game as if it were a player. Okay, I understand that you are converting human-centric counting of row/column numbers from 1-3 into 0-2, but why are you using 0-2? You create tuples for all board locations, and use these generated tuples through-out the code. Why not use the "human friendly" tuples values as the keys, and ditch your "machine" versions, like:

state_generator(get_input): Oh, where do I start? First, you've got duplicated code for TIC and for TAC. If you had a player variable, you could start with player = TIC, and toggle between players with player = 1 - player. Then, you could loop over the 9 possible turns, instead of over the 5 pairs of turns. The ugly hard-coded 5th turn-pair special case of a "tie" goes away; if the loop exits after all 9 moves and no winner, then you have a tie.

Hard coded mysterious numbers like 4 and 5? Where did they come from? No comment in sight which explains it. Slightly better is the above suggestion of looping over 9 turns. But, again, why use 9? How about len(INDICES)? Or better, loop while there are still valid moves someone can make. Then you can experiment with 4x4 tic-tac-toe grids or other variants:

Finally, using a generator construct, with input dependency injection, which blocks waiting for input from the console? Yes, it works, but don't do this. You could easily replace this with a function with a simple loop, and pass both get_input and draw as arguments to the function.

get_int(...): You import all sorts of values from logic, but you are checking for data not in range(1,4). Why is this hard-coded? What if you wanted a 4x4 tic-tac-toe game? You could define VALID_ROWS and VALID_COLS as range(1,4) in "logic" and import those values, and pass the valid range as an argument to get_int.

get_input():. Why does it have a default for info? A value is always explicitly being given; the default just adds noise to the code. Interestingly, the the user input is never checked to see if the is_valid_move test passes. You can put an X on top of your opponent's O...

draw(state): Whenever you see tmp = [] followed by for x in y: wrapping a tmp.append(...), you can almost always replace this with list comprehension, eliminating the costly list.append() operations:

Not the answer you're looking for? Browse other questions tagged python tic-tac-toe or ask your own question.