Historical Friday: this was my first useful C program, written around 1993-1994 (with only occasional access to a compiler and runtime environment). It's also my first non-trivial Postscript, too.

I was a student at the time I wrote this, and unable to transport a turntable to and from my accommodation, so I recorded my favourite albums to cassette tape. But I was already showing a perfectionist streak - hand-written box labels aren't neat enough, and the interactive graphics editors were never going to give consistent results (additionally, I'm too lazy for all the manual work required). So I needed some automation.

Input is line-oriented, in ISO 8859-1 encoding. The first line specifies the artist and the second the album name. Then there's a blank line, then a line for each track. The track listing is terminated by a line with a single . (to end a side) or with .. (to end the tape). We start again with artist and title, but they may be omitted if the same as the previous side.

Here's an example input file (this one is particularly difficult due to the long titles):

Output is a Postscript file ready for printing, with 2 to 4 labels fitting on an A4 sheet. In particular, the artist and album are consistently arranged on the spine and rear slip (with a shared name spanning both halves; otherwise divided in two). If all titles could fit on the front of the box, then we have a simple layout, taking ¼ page; otherwise we get a extended label that takes ½ page and is folded with the excess on the inside of the box.

Because we have a mix of ½-page and ¼-page outputs, I maintain 2 pages worth of "slots" into which these can be placed, so as to get the best use of paper.

I avoid widowed text by squashing to fit if it's only slightly over height of one side. Word wrapping is evaded by shrinking to fit (even if it makes for unreadable text). 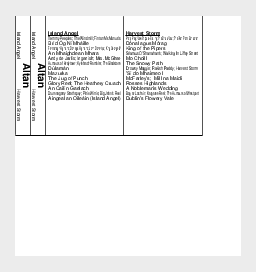 Although I'm very tempted to edit it, this is the code I wrote a quarter-century or so since (so the standard is C89) with no cleanup at all.

This is an interesting time capsule. I have come across my own code decades after I wrote it and thought "wow, what horrible code!" Yours doesn't seem too bad, but of course, there's room for improvement.

As this question explains fairly well, using feof() only tells you if the previous read encountered the end of the file, and nothing has been read from the file handle when get_tape() is called. For that reason, this line

If the feof check is used, it should be before memory is allocated for a new Tape.

Use more whitespace to enhance readability of the code

most people find it more easily readable if you use more space:

There is a subtle bug in the program. In the getline() routine (which I've renamed getoneline() to avoid conflict with getline in stdio.h) we have these few lines:

The problem is that if the line was a single newline character, the second time isspace is called, it will be pointing one byte before line which is undefined behavior. I'd rewrite those lines like this:

If we have .. as the last line of the input file, which signals "end of tape" according to your description, we have a segfault and crash. The reason is that after the .. is read, the loop in main creates a second Tape with the default NULL values. Later, when print_title is called, it segfaults because the NULL is derefernced in print_literal. This could easily be fixed by simply bailing early out of print_literal if the passed pointer is NULL. In general, the program is rather fragile when the input doesn't exactly match what it's expecting.

The Tape structures are allocated but never freed which is a memory leak. I'd suggest adding calls to clear_page from within print_postamble since we know we're done with all pages at the time that's called. Also, the noise-reduction line that's read should be freed so instead of this:

it should be this:

Or alternatively, create another function ignoreLine that would do just that without allocating memory.

Avoid the use of global variables

Rethink the division of labor

As you've noted there are some things done in PostScript and some in C and magic numbers everywhere. We can do better! Specifically, I'd recommend letting PostScript do more and have the C program do less. The reason is that Postscript is quite good at layout, translation and rotation. For that reason, I'd be inclined to simply have the C program print something like this in PostScript:

Then, of course, we'd need to define those PostScript functions. Which leads to a somewhat more general comment on the PostScript code.

Essentially what this does is draw three, or possibly 4 boxes. First, let's create a simple function:

The first thing we have is comments. The first says what it does and the second is a stack comment which is a very common technique in PostScript and in Forth. Essentially, it says what's expected to be on the stack before the call and what's on the stack after (with -- being the dividing line).

The second is that we have a very simple function that just draws a box. Now we can rewrite doframme:

We can make things even simpler if we terminate each box with a move to the lower right corner. So, redefining box:

Now our doframe is even simpler:

It should also be apparent that if we move the moveto outside of doframe, we can easily draw the frame anywhere on the page since all of the subsequent moves and lines are relative. By thinking carefully about how these functions are used, we can better restructure them to simplify the code and to enhance understanding.

Some things I would do differently now:

To add to @Toby Speight good self answer:

Alos, with array sizing and indexing, best to use size_t.

Use double unless float needed for space/speed

Such strings (> 4095) go over the minimal environmental limit. I'd expect this string data to be read from another file.

Yes, original code was C89, but we do not have to stay there.

On 2nd thought, we can let register go to the gets() home

Be careful with is...() functions

is...(int x) is valid for EOF and unsigned char values. A negative char can lead to UB

A style issue, yet I like to avoid ! and != when able as a positive test is easier to read. Perhaps you don't not think otherwise, no?

A post C89 thing, yet instead of a dangling uninitialized object, declare it when needed. Example:

Not the answer you're looking for? Browse other questions tagged c c89 postscript or ask your own question.

2
Wet Boxes problem: counting points on a triangular grid
4
Error-checking macro to jump to specified label given a failing statement