I designed this object for a "bread formula". They use a concept known as baker's percentages, but you don't need to understand the math to help with the object design.

I designed it as an object (of type Formula) that contains objects (of type Ingredient). 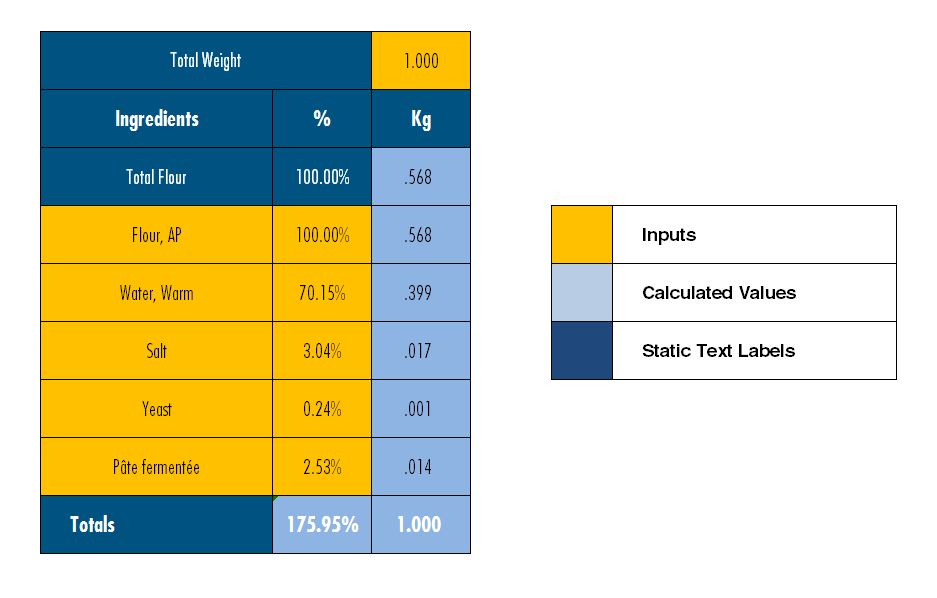 Both classes have nullable properties. C# demarcates nullable types using a ? after the type, like so:

The reason I declare them as nullable types is because I don't know their values (when I create an instance of them) until I calculate them later, as which point I update the null value with a calculated value.

The calculations are just basic methods, like CalculateSum() or CalculateWeight().

Is there a better way to design this object? It works, but I feel like it's the wrong way to do things. I feel like I'm trying to force-fit inline/declarative style programming into an OOP design, but I don't know how else to do it, being so new to OOP.

My thinking is that this object has this property. I won't know its value when I create an instance of it, so I must declare it as nullable. Once I calculate its value using a method that's also internal to the class, I assign/set its value. Then it will no longer be null.

Here's the code for calculating Formula.SumPercentages, which was declared as nullable, but is now assigned a value:

Everyone has had good ideas, but since you're asking about OOP, I'd suggest refactoring it altogether.

By doing it this way, you separate the formula (which is basically just Ingredient/Percentage pairs) from each application of it. You can use the same Formula object to calculate the weights for 10000g of dough or 50000g of dough - simply call GetWeights() with a different value.

Notice how many fewer properties you need on each class, and the question of "late setting" of some of them is entirely irrelevant. Effectively, weight is not an intrinsic property of an ingredient, because it varies based on the total weight, so Weight shouldn't be a property of Ingredient.

Here's my humble opinion, it generally looks OK, here are some basic tips:

The nullable part is not really needed, but it can work. If '0' is a valid value for 'no weight', then you can use regular decimal which will be initialized to 0. If you really want a null value for something special, you can leave it. Right now I'll be working under the assumption that the properties are still nullable.

Considering that, I'd just make a few changes:

I'm not quite sure what the WeightTotalDough is and where it comes from, but there it is. I don't know if you have to expose the Ingredients collection or do you just want to have the fields calculated. If it's the latter, make the List private and just expose the properties. Also I assume you won't pass null collection inside the Formula. After initialization, you can just get the values:

I'm a fan of immutable objects for their various benefits. Below is an example of how to make your Ingredient class immutable. Similar techniques can be made to your Formula class. I also highly recommend not using ArrayList in favor of a generic List<Ingredient> as Trust me - I'm a Doctor recommends.

I usually don't like too much nullable and I propose an alternative design to your problem.

I think that you should separate the ingredients as specified in the recipe, which contains only the percentages with the actual quantities you need.

I'd go for a class Ingredient describing an ingredient and its percentage, another class Quantity that represent the actual quantity of each ingredient and finally a Recipe class.

The Recipe class should contain the list of ingredients needed and it should have a method List<Quantity> computeQuantities(decimal totalDoughWeight) that computes the quantities of each ingredient you need.

In this way you clearly separate the recipe and the quantities needed in a particular time.

I think that this design is closer to the domain you want to model (In which recipes and actual quantities are separate entities) and it is cleaner because it does not require you to introduce any nullable.

Mutability is very often the source of pain for developers and I suggest you to avoid it as much as possible, by breaking into two parts your logic: object construction and object usage.

If the properties of your class are not available all from the beginning, the right approach for me is to to use a builder, which is mutable, but express clearly the fact that there is no object created yet. When you have all the properties set, you can call builder.build to create an instance of the object, and in case the properties are not all set, you will throw an exception here.

As a result, all the clients of the class (meaning those parts of the code which use an instance of that class) could rely on the fact that the instance is in correct state and you can use your object for an infinite amount of time without having to check if that property is null or not. The single point of failure is now the creation of the object, which can throw an exception if you didn't provide on the builder all the required properties.

Separating object construction from object itself is a great way to express your intention, make your code readable and avoid tedious bugs.

There are several points that is possible to improve.

If you are working at least with C# 2.0 (as I expect because you mentioned Nullable<decimal>), you could replace ArrayList with List<Ingredient> or even IEnumerable<Ingredient>. This will make it more intuitive, and later you could remove type casting from SumPercentages.

Then, if you are working at least with C# 3.0 you could, rewrite SumPercentages using LINQ:

Last point, to implement ICloneable for both Formula and Ingredient, then replace

So Ingredients will be a copy of the initial array. This will prevent a situation when you unwittingly change the list of ingredients after you have created Formula.

Not sure I have a whole lot to add here, but based on the business requirement of representing baker's percentages, I think the object model should be changed to reflect the domain better. As in:

Granted, I'm taking more of a DDD approach here, but it makes more sense to me.