This is my solution to the ECOO 2015 contest, problem 1, Fractorials. I'd appreciate any advice to improve readability, style, organization, etc. 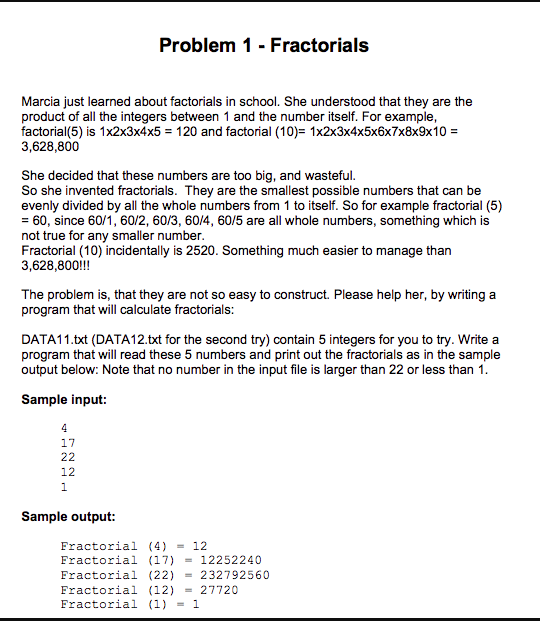 Overall the code is quite easy to read, but it is more complicated than it needs to be.

I would expect the name fractorial to be either the final integer or the function which computes it. Perhaps fractorial_factorization would be a clearer name.

The algorithm used to compute the prime factorisation of the fractorial is correct, but overkill. If \$p\$ is a prime and \$a\$ is a positive integer, under what condition is \$p^a\$ a factor of the \$n\$th fractorial?

Apart from the hard-coded primes, this is a standard implementation. I would suggest that p is more conventionally used to denote primes[i], so perhaps power would be a less surprising name.

Although it's preferable to avoid repeating the lookup. The efficient way of doing this is

Apart from the previous comment about the name, the only thing I'd say here is that if you really want to scale this up, multiplying lots of small numbers is best done on a tree-like basis. I.e. you pair up the numbers, multiply each pair, pair up again, multiply again, ... But that's overkill for this problem.

This is half-way between the naïve approach of not defining main() at all and just dumping its contents at the end, and the "best practice" approach of

Might as well get used to the best practice approach now.

Your iteration technique is a bit clumsy for Python:

Clarity could be improved as well:

As @hjpotter92 noted, the fractorial is simply the LCM of all numbers up to n. The answer can be computed with much less code. Note that functools.reduce() is a more elegant shorthand for a particular kind of loop. (In case you consider using the built-in math.gcd() to be cheating, you can easily reimplement it using the Euclidean Algorithm.)

Note that the challenge says that you should be prepared to accept an input file with multiple lines, which you haven't supported. I've used fileinput.input() to help with that.