I am trying to improve the quality of my code as well as trying to study the Heap data structure. I have implemented a minHeap (Heap in which minimum value nodes have higher priority). Ref: link1, link2, link3. This is the commented code:

You never delete[] arr;, which leaks memory. Not a good thing! There are multiple ways to fix this:

I'd suggest using the last option, unless you have some really strong reasons for not using std::vector.

At the very lowest level, one could extract the comparison operation and the actual container and write the heap logic independently of those. This would allow to reuse the same implementation for many orderings (min-heap, max-heap, ...) and different underlying storage.

Most of the remaining public facing member functions have names that differ from the usual standard library ones. Examples:

A revised class design could look something like this:

Some of those member functions could be marked noexcept (or conditionally noexcept), depending on their actual implementation.

An addendum to hoffmale's excellent answer (read and upvote that one first!):

The standard library provides plenty of exception types (<stdexcept>) you could be using. 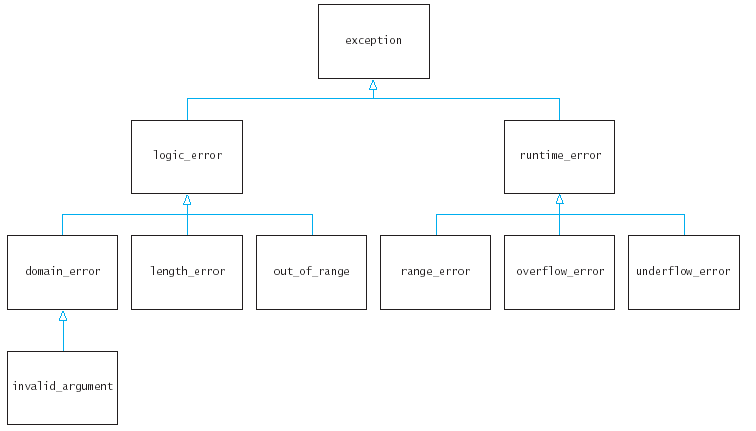 If you want to specify your own type, derive from std::logic_error or std::runtime_error or any of their derived types. For your program, std::out_of_range already exists, so you could use that. Maybe you want something more specific, like popped_on_empty,

Should this be part of the public api?

Make sure you namespace-qualify names. size_t is not guaranteed by the standard to exist while std::size_t is.

Don't rely on other headers to transitively include files your code is dependent on. Always include the exact header that you need. (<cstddef> for std::size_t, <string> for std::string)

Your minHeap takes ownership of a dynamic allocation. You should follow the rule of five. Basically, whenever your class is managing some resource or responsibility, you should consider how the default compiler-generated behavior of the five special member functions operate on that object. The five special member functions you must consider are the copy constructor, move constructor, copy assignment operator, move assignment operator, and destructor.

A better approach is to use a container to manage the memory for you. If the value semantics of a container behaves correctly with the compiler generated member functions, then you do not have to define them yourself. This is the considered the rule of zero.

When constructing objects, prefer initialization over assignment. If you have a constant value you are initializing a data member to (like length with zero), use the in-class member initializers.

Avoid calling new/delete explicitly. Use std::make_unique<T[]> to create a std::unique_ptr<T[]> to manage the lifetime of arr. You still need to consider the five special member functions.

Do not use else after the flow control has been interrupted by a jump statement (return, break, continue, and goto).

There is no need to print an error message here. Any information you want to inform the callee should be passed back through the exception. Let the callee report the error information to the console if they want to. Use a logging library if you need to track events.

Avoid std::endl. Passing the stream manipulator std::endl inserts a new line character into the stream and then flushes the stream. When working with buffered streams, this is often an unexpected side effect. Just stream the end line character ('\n' or "\n"). If you want to flush the stream as well, explicitly state your intent by streaming std::flush.

Don't state in comments what can be clearly stated in code. Compilers do not read comments. The added verbosity is not as precise as code and is not updated nearly as often/consistently. Comments should state what is done, not what is supposed to be done.

You have an accessor (MinHeap<T>::get_min()) that returns the minimum in the heap. Does MinHeap<T>::delete_min() also need to provide the minimum?

NULL is a macro variable that represents the value 0. You are doing a C-style cast of 0 to type T. If T is a non-integral type, bad things will happen.

If std::swap is not specialized for T, you'll have a problem. You can read more about the std two-step here.

All of your math in this loop has implicit conversions between std::size_t i and int min_child; from changing signedness to possible precision loss to signed/unsigned comparison.

Should callers have access to the internal heapified array? I'm not convinced it's necessary. If you take the adapter approach for your heap class, in which some other container owns the memory, you can make the container a protected member accessible through inheritance.

1) Are heaps used for data types other than numeric?

Yes. Anything that can be ordered can be heap sorted. Uses that immediately spring to mind are:

Instead of using an extreme value to represent the priority, consider using a comparator that forces the value to sift up as the minimum (always returns true as being less than its parent).

2) Is there a better way to handle out of range errors without using exceptions and not returning a value such as INT_MAX, INT_MIN or zero?

There are many ways to handle the unexpected situation of popping an empty list. Here are a couple defensive design approaches that checks the preconditions and informs the user of an error:

The caller is free to ignore the result type unless the [[nodiscard]] attribute is declared (C++17).

Alternatively, there is the design-by-contract approach - There is an assumption that all of the client components that invoke an operation will meet the preconditions specified as required for that operation. The pop operation requires the container not be empty and calling pop on an empty heap will attempt to pop as if there were an element there. The expected result is undefined behavior. Formal systems to enforce contracts are coming to C++. Boost.Contracts is currently in development. C++20 will provide expects, ensures, and assert attributes.

3) What could be other possible improvements in the code?

Not the answer you're looking for? Browse other questions tagged c++ error-handling generics heap or ask your own question.