These classes are part of a program I am working on to convert Arabic numerals to Roman numerals and vice-versa. Do these classes look correct for representing objects in Java?

I wouldn't do an ArabicNumeral, too, as this is the default numeric system of java.

From a design view, I would see an object RomanNumeral, which is an aggregation of RomanLiteralobjects, this RomanLiteral, are the constant roman string->decimal value pairs, which can't be computed.

Both classes can extend java.lang.Number 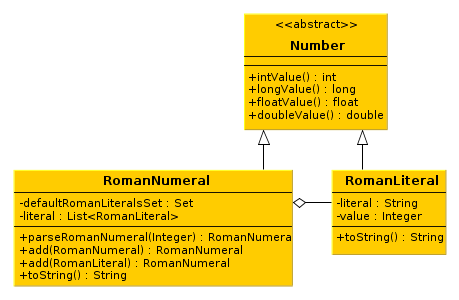 Class RomanLiteral represents one base value of the roman numeral system, it is a String - Integer relation, e.g. "V" -> 5. toString() is overriden to return the String value.

Class RomanNumeral Represents a fully roman numeral, it is an aggregate of RomanLiterals, which are basic String - Integer relation, e.g. "V" -> 5, and so on.

I think that would be a good useable design. I would stay quite near to the Number style of java, and would do my implementation and design in this direction. (analgous methods and so on..)

What does getMultipleOfFive mean? And why should it return 1000 when called on 500?

Objects, like everything else, are meaningful only in a context. There is not a one-correct-representation of an arabic numeral. Arabic numerals are default representation so you probably do not need ArabicNumeral at all. only logic there is in:

which can be rewritten as :

This is about general design structure.

Every method should “pull its weight.” Too many methods make a class difficult to learn, use,document, test, and maintain.

Not the answer you're looking for? Browse other questions tagged java beginner object-oriented converting roman-numerals or ask your own question.