I have this code that converts audio to different file formats:

Now, the xToX conversion basically the same throughout the whole code implementation. The only thing will change is the codec.

What is another way to make this code cleaner? From my point of view it repeats itself. What should I change? Or are there any design patterns I should implement?

Name and semantic of your class

I have this code that converts audio to different file formats.

Not exactly, your code is a client to an Encoder, that converts audio to different file formats. In design, it is very important to be certain about the reason and semantic of an object. So first, the name AudioEncoderDecoder is bad. It says nothing about the sematic of the object. I would call it AudioFormatConverter as it converts one audio file format to another.

a) Naming encodeAudio() is not clear, convert() would be clear and consistent with the classname.

b) Parameters: source, target file seems good. But why would I pass in the mimeType? And how can I specify which target format I choose?

One conversion method in the public interface, source and target file, the mime type is guessed by the file extension. You could add another public method, where you take in the mimetype, as needed. But keep the interface of your class as simple, logic, consistent and understandable as possible.

I would declare an checked exception for error handling, formats not avail or whatever.

If there will be more formats, codecs, mimetypes you could take a look at Chain of responsibility or Dispatcher/Command pattern. These patterns also add flexibility to easily support more mimetypes at runtime. Without those patterns, you may get a mid-to-big if/then/else block. 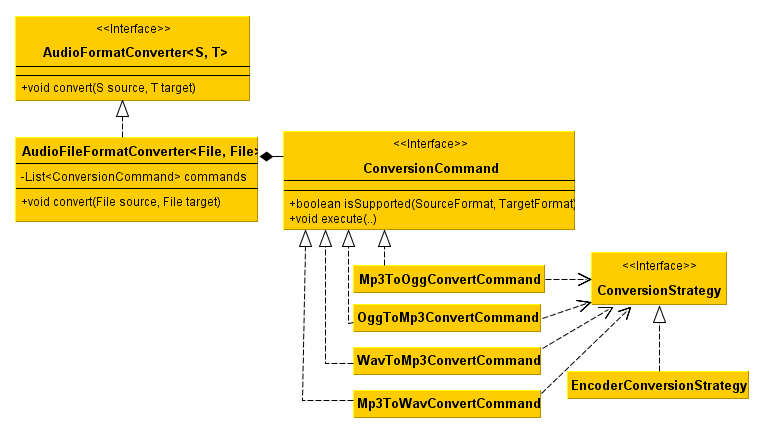 Note that ConversionCommands should be prototypes, so that each execute happens in its own Command instance.

Now in code, you would setup the AudioFileFormatConverter and add the supported ConversionCommands to it.

In your case you can easily improve the code if you generalize the mp3ToOgg and oggToMp3 methods.

So that you have only one general method for converting with the signature:

Have you considered using a single method?

You can theoretically use this one method to convert any source type to any target type.

Not the answer you're looking for? Browse other questions tagged java performance converting interface audio or ask your own question.