Disclaimer: This is my first clojure function & I'm still busy finishing the last chapters of "Programming Clojure". Thanks! :)

I am writing a function to randomly flood-fill parts of a game's map (i.e. this is not a traditional flood-fill that can recursively fill all available space). The idea is to create a random-shaped island, and inside that island create a random-shaped mountain. (i.e. pass the set of island points as a filter to the next flood fill function, so the mountain will be created only within the island's tiles).

This is what my code currently produces (You'll notice the window / drawing code stolen from the snake game in PragProg's Programming Clojure. ;)) 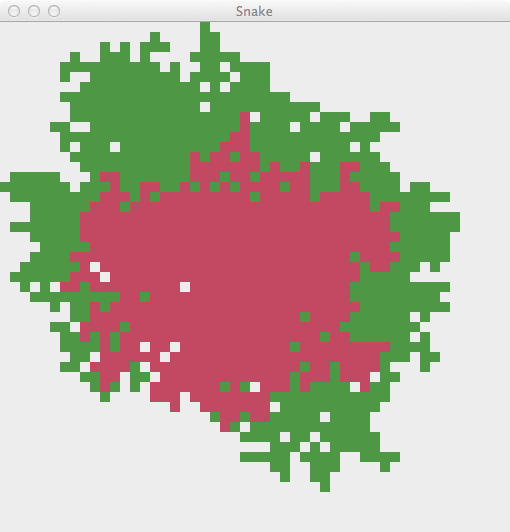 My flood-fill2 does much better:

Any performance suggestions? I tried to avoid many conversions from Sets to Vectors/Lists, but rand-nth needs a sequence and I couldn't find a nice "random set element" function.

Thanks for reading all of this.

I am a journeyman myself in clojure, and I don't have answers for all of your questions, but I have some input.

I am not sure I fully understand your algorithm, but it seems you really have two loops rolled in to one. You have an inner loop looking for what could be the next tile to paint (without counting i), and an outer loop actually filling pixels and counting i down from n. Maybe it could be clearer if you separated these two somehow.

And since you choose candidates on random, it will be random how long it takes for you to fill n tiles.

I have found that when I do:

It can often be re-written as:

(But I can't immediately see if this applies to your function)

Have you considered implementing this using a 2d array of tiles, instead of a list of coordinates?

A couple of other issues:

Not the answer you're looking for? Browse other questions tagged optimization functional-programming clojure or ask your own question.